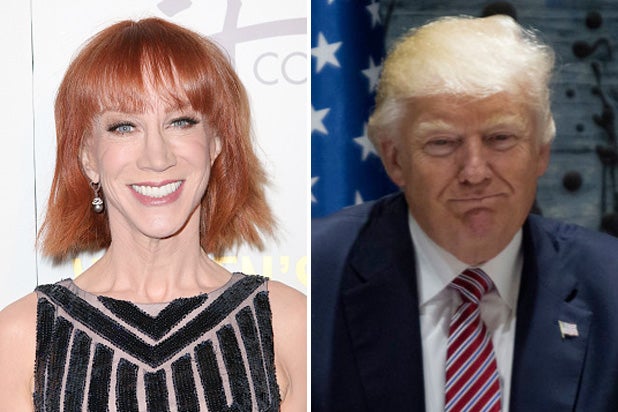 Griffin, who found herself the target of widespread criticism last year after posing with what appeared to be the severed head of President Donald Trump, told Playboy in a new interview that her fellow comedian and “The Celebrity Apprentice” alum Joan Rivers warned her about getting on the wrong side of “Apprentice” star Trump.

According to Griffin, Rivers, who died in 2014, cautioned Griffin during their “final dinner.”

“You’re not going to believe this s–t — and I’m going to try not to cry — but Joan told me at our final dinner, ‘Don’t make an enemy of Trump. Don’t ever go up against Donald,'” Griffin said.

“But Joan and I were politically diametrically opposed. She was Republican; I’m a Democrat,” she added. “Who cares? I loved her and respected her and hung on her every word.”

Griffin suffered significant career fallout after the photo was made public. Among the damage: Losing her annual gig at CNN’s New Year’s Eve coverage, which she had co-hosted with CNN anchor Anderson Cooper for a decade. Cooper condemned the photo in a tweet, writing, “For the record, I am appalled by the photo shoot Kathy Griffin took part in. It is clearly disgusting and completely inappropriate.”

Griffin told Playboy that Cooper “let five months pass before he texted me” — and that it “was a bitchy text.”