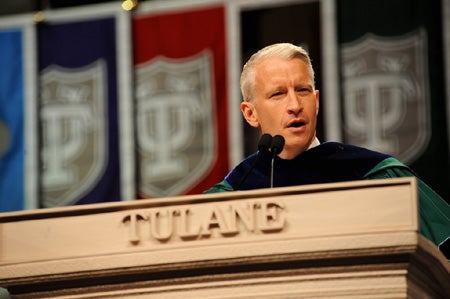 It’s May, and that means college graduations, where television personalities hit the commencement circuit hard to impart some quasi-real life knowledge to graduates – and to collect honorary degrees to be prominently displayed in their midtown offices. Check out TVNewser’s handy schedule of TV personalities on the 2010 commencement speaking tour (I’m totally hitting up Ann Curry at Southern Oregon University on June 5).

Some heavy hitters were up over the weekend: Katie Couric addressed Case Western Reserve University in Cleveland, urging grads to follow their dreams. Not all of them, mind you, just the realistic ones: 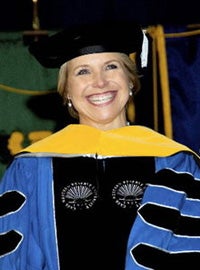 "Be realistic, you can’t do whatever you want. A less-than dream job can help you find your dreams. Work hard. There is just no way around it. Hard work is the answer."

Brian Williams delivered the commencement address at Notre Dame, where one grad recognized him more from his turn on “30 Rock” than "Nightly News." Rachel Maddow (Smith College) and Glenn Beck (Liberty) also spoke to grads over the weekend.

The best commencement speech I read, though, was Anderson Cooper’s at Tulane (“Your choice has helped this city … restart.")

But Cooper was apparently upstaged by the surprise appearance of Jonathan Vilma, linebacker for the Super Bowl champion New Orleans Saints:

People clapped wildly and chanted "Who Dat," a scene similar to one a week earlier at the Superdome when quarterback Drew Brees spoke at Loyola University’s commencement.