Katie Couric has some thoughts on CNN head Jeff Zucker’s abrupt resignation this week, particularly about those who knew about his relationship with Allison Gollust.

On Wednesday, Zucker shocked the company when he resigned, saying he had a relationship with his “closest colleague” that he did not disclose at the onset. That colleague has been confirmed as Allison Gollust, who had worked closely with Zucker for two decades. On Thursday, Couric noted that Zucker and Gollust’s relationship wasn’t surprising, but Zucker’s resignation definitely was.

“I worked with Jeff Zucker for many years at NBC and later on my talk show. He was a talented and energetic producer. His resignation took me by surprise,” Couric wrote in her newsletter. “I’ve also known Allison Gollust since my days at the ‘Today’ show. I’ve wondered about the nature of their relationship, but I do know, as I wrote in my memoir ‘Going There’, that it made me uncomfortable. It seems their colleagues and the media at large turned a blind eye to inappropriate behavior.” 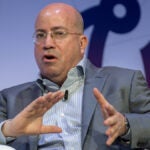 Couric’s statement on Thursday did not expound any further, but in her 2021 memoir “Going There,” Couric recounted how Zucker pushed her to hire Gollust to handle publicity on her short-lived syndicated show “Katie” (2012-14).

“I had to wonder why Jeff was angling so hard to bring Allison on board,” Couric wrote at the time. “She and her husband and kids had moved into the apartment right above Jeff and Caryn’s — everyone who heard about their cozy arrangement thought it was super strange,” Couric wrote. “By that point, Caryn (Zucker’s ex-wife) had become a close friend and it made me really uncomfortable.”