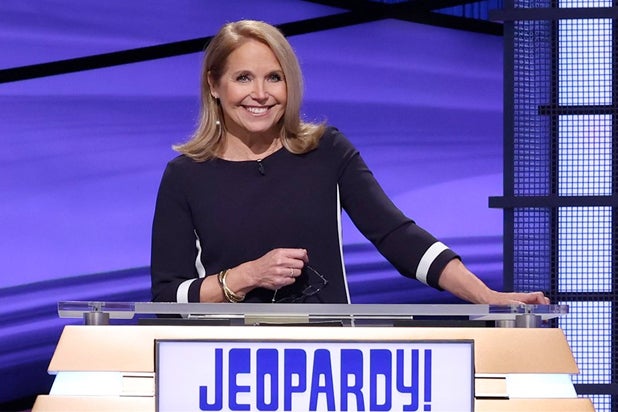 “Jeopardy!” ratings dipped 5% in Katie Couric’s debut week as guest host. The syndicated Sony game show finished in a first-place tie with “Wheel of Fortune,” both with 5.6 household ratings.

“Wheel,” which was down 2% from the previous week in ratings, averaged almost 200,000 more total viewers than “Jeopardy!” got. “Family Feud” finished third among the game shows, declining 5% to a 5.4 household rating.

Couric was the game show’s first-ever female host. On March 8, she took the baton from “Jeopardy!” executive producer Mike Richards, who himself grabbed it from the game’s legendary champion and current consulting producer Ken Jennings.

As part of Couric’s appearance, a donation is being made to Stand Up To Cancer.

Future guest hosts as the show works out a permanent succession plan include Green Bay Packers quarterback Aaron Rodgers, “60 Minutes” correspondent Bill Whitaker and “Call Me Kat” star Mayim Bialik. The show will make a donation to a charity of each host’s choosing in an amount equal to the contestants’ cumulative winnings during their respective week of episodes.

“Jeopardy!” has been on a wild ratings ride in 2021. The final episodes for longtime host Alex Trebek, who died in November following a battle with pancreatic cancer, hit season highs in early January. The show pulled in 6.6 rating across his farewell week, with his final episode on Jan. 8 drawing 14 million viewers, more than any episode in over a year.

Jennings drew a 6.2 rating in his first week. In Week 2, he had a 5.9 rating. Jennings holds the “Jeopardy!” records for wins and cash prizes. He also won the show’s “Greatest of All Time” tournament.

Also for the week ending March 14, 2021, “Live With Kelly and Ryan” led the talk shows with a 1.8 rating and “Judge Judy was comfortably about the courtroom shows with a 5.2 rating.