Between her reporting for Yahoo and her documentary work, Katie Couric is busier than ever. The focus of her latest project is a feature-length movie about the scourge of gun violence in America. “Under the Gun,” which debuted at the Sundance Film Festival in January and premieres on EPIX on May 15, is often an infuriating piece of work.

The documentary, directed by Stephanie Soechtig and executive produced by Couric, reminds viewers how intractable the issue has become despite the overwhelming public support for basic limits on the availability of guns, including a majority of gun owners backing basic background checks.

WaxWord spoke to Couric ahead of Tuesday’s night’s premiere in Los Angeles.

Are we talking about guns enough in this election cycle?

I was working on this film during this election cycle and it was surprising to me how little discussion was coming up. In some cases it was my fault, I wasn’t talking to the candidates about it, but it didn’t seem to be on anyone’s radar screen.

In recent months there’s been a lot more conversation, and in the general election it will come up — but I don’t think we’re talking about it. People’s eyes glaze over. People feel it’s a hot button issue and we feel so entrenched in our specific positions that we’re not even open to conversation.

Also Read: Jennifer Hudson Speaks Out Against Gun Violence: 'This Is Reality for Me' 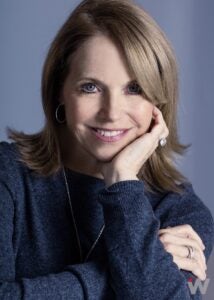 What we’re trying to do is set the table for an informed discussion. We embedded with a number of families who’ve lost loved ones to gun violence: a couple from Chicago; the Bardens from Sandy Hook; Richard Martinez, who lost his son Christopher in Isla Vista.

What happens when the cameras stop rolling and cars pull away? Through personal stories we weave policy conversations with the primary question — why has nothing been done?

Do you come at this with a particular political approach?

We tried to explore it in an open-minded way. We tried to get into the psyche of gun owners. We don’t even explore the right to bear arms. The question is, how can we as a society be more responsible? How can we reduce access? Through this documentary we talk about the impediments to some kind of reasonable safety measures.

How has Bernie Sanders handled the gun issue in your view? Did that hurt him with left-wing Democrats in the wake of Sandy Hook?

I get the impression that it’s perplexing for his supporters. It doesn’t seem to be in keeping with his other positions.

Among the candidates, Hillary Clinton is supposed to be strongest on gun control, but she’s had a fundraiser with a gun lobbyist. Can she change anything?

We’ll have to see what happens with Congress, what the whole political picture looks like. A lot is being done at the state level. There are 18 states through ballot initiatives that have passed background checks, and there’s another in Nevada and Maine. People advocating for sensible gun laws are becoming a more potent political force.

After spending time with NRA members, what did you come away with?

People who don’t want anything done are single-issue voters. But 74 percent of NRA members support universal background checks. A false narrative has been perpetuated by the gun lobby. There is much more common ground than we believe. Everything is drowned out by extremists voices.

You have a day job at Yahoo, which is up for sale. So, I have to ask: What’s going to happen at Yahoo?

I don’t know. Obviously, news flash — they’re selling us. I don’t have any intel, you may know more than I do. Right now, I don’t really know what the future of Yahoo is. I have an incredible team of people and we are putting out as much quality as we possibly can.

I had an exclusive interview with Syrian refugees the Pope brought to Rome. We keep our heads down and do good work.

Are you nervous about what will happen to you if and when Yahoo is sold?

[Laughs] We’re as interested as everyone else in who will purchase Yahoo. I’m nervous for other people who maybe don’t have as much as diversified portfolio as I do. I’m lucky I have a variety of projects I’m working on. For my colleagues, I’m more on pins and needles for them. For me, I’m lucky to be able to make decisions for me personally.

WaxWord also spoke to Couric at the Sundance Film Festival, where “Under the Gun” premiered. Watch the video from that interview below:

On the heels of the cable news network targeting ”Star Wars,“ TheWrap takes a look at 10 more times Fox News personalities found a reason to target the entertainment industry