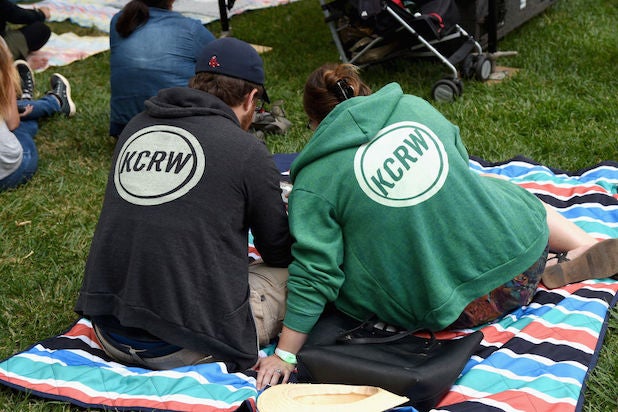 KCRW has eliminated 28 jobs through buyouts and layoffs as the Santa Monica-based public radio station projects a whopping 30% loss to its operating budget due to the pandemic.

In an open letter published on Wednesday, KCRW President Jennifer Ferro said that while a federal loan through the Paycheck Protection Program helped the station keep staff on through last month, the ongoing economic damage caused by the pandemic led the station to offer voluntary buyouts to staff, which 24 staffers agreed to take. Another four positions were eliminated on Wednesday, bringing the total to 28 — or roughly 18% of the station’s full- and part-time staff.

“We know the employees of KCRW are the most important asset we have, and we wanted to give people who were interested in this option the chance to make a decision for themselves about their future,” Ferro wrote. “Their participation helped stave off the need for larger cuts.”

Still, Ferro said that four positions needed to be eliminated to “align” the station “strongly for the future.”

“Affected employees were informed today and will be offered severance and job support, during what we know will be a difficult time. We wish all of our departing team members our gratitude for their time at KCRW,” Ferro wrote, adding that KCRW’s senior leadership team would be taking “an aggregate of 20% salary cuts,” with Ferro “taking the largest portion.”

Among those leaving the station are on-air talent such as Liza Richardson, Mario Cotto, Mathieu Schreyer and Frances Anderton.

The past six months have been a test for all of us. Through it all, the KCRW team has worked tirelessly to deliver on our mission to inspire our listeners – across Southern California and across the globe – with the content we put on the air and online.

I have never met a more talented or more dedicated team of people. And I have never been more honored to work among them.

Unfortunately, like so many media organizations across the country, KCRW cannot escape the long-term effects of the ongoing COVID-19 crisis. We are projecting a 30% loss to our operating budget this fiscal year, primarily due to a large dip in sponsorship revenue from categories worst hit by the pandemic.

Thankfully, our audience is growing. KCRW has moved to become LA’s #1 most listened-to public radio station over these last few months. Our digital traffic has grown as well. More people are connecting with KCRW during this time than ever before. Our membership numbers and dollars are also strong.

Earlier this year, we were able to secure a Paycheck Protection Program (PPP) loan from the federal government. That, coupled with immediate non-personnel budget cuts, allowed us to keep our staff whole through August.

However, the extended nature of the economic ramifications of COVID has now required us to take further action to preserve the financial sustainability of the station and the services we provide.

Several weeks ago, we offered a generous voluntary separation package to all eligible employees. We know the employees of KCRW are the most important asset we have, and we wanted to give people who were interested in this option the chance to make a decision for themselves about their future.

In the end, 24 KCRW employees took advantage of the voluntary separation program. Their participation helped stave off the need for larger cuts. In order to align ourselves strongly for the future, we made the difficult decision to eliminate four positions. Affected employees were informed today and will be offered severance and job support, during what we know will be a difficult time. We wish all of our departing team members our gratitude for their time at KCRW.

In an effort to avoid any further reductions to our staff, the senior leadership team will take an aggregate of 20% salary cuts with me taking the largest portion.

As we look to the future, we will lean into what KCRW is known for – music discovery, vital news and information and cultural programming. We plan to place even greater emphasis on engaging with our digital audience, which has grown significantly since the safer-at-home orders began.

And, we will continue to advance our programming mission.

On September 9th, along with NPR, we launched Consider This, the nation’s first local/national daily podcast produced in an unprecedented partnership between both major Los Angeles NPR affiliates, KCRW and KPCC. Lost Notes: Season 3, KCRW’s documentary music podcast, launches this month with critic and poet Hanif Abdurraqid as host.

Soon, KCRW will announce our new host for our signature music show, Morning Becomes Eclectic. And later this month, we are looking forward to launching Our Body Politic, a political show by, for and about women of color, with journalist Farai Chideya. KCRW has also had great success with virtual events around music, like This Album Saved My Teenage Years, and virtual events analyzing politics, which we will continue to offer leading into this year’s landmark election.

KCRW is a special place with deep connections to the communities we serve. We remain committed to telling stories that inspire a greater understanding of the institutions and people around us. In the current moment, our mission is more important than ever.

And while the changes we have announced this week were not easy, we know they are necessary to ensure KCRW remains strong for years to come.

Thank you for your support.