Nothing like waiting till the last minute: KCRW has promoted assistant general manager Jennifer Ferro to succeed Ruth Seymour as general manager of the influential public radio station based in Santa Monica, starting March 1. 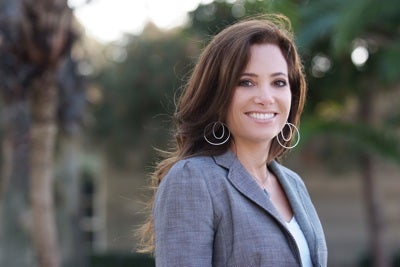 The college board of trustees, which controls KCRW’s license, issued the statement this morning:

"The SMC Board of Trustees today (Feb. 20) approved the selection of Ferro, who begins in her new position March 1. Ferro succeeds Ruth Seymour, who is retiring Feb. 26 after running KCRW for 32 years and building it into a powerhouse National Public Radio affiliate with a global audience.

“Jennifer epitomizes the perfect mix of traditional public radio experience, and the strategic and creative new media thinking that will be critical to KCRW’s continued success in the years ahead,” said SMC President Dr. Chui L. Tsang in making the announcement.

Ferro (pictured, photo by Marc Goldstein) is currently executive producer of two arts-oriented shows on the station, "Good Food With Evan Kleiman" and a design show hosted by Frances Anderton.

She has instituted changes to the station’s online strategy, with three online channels and an iPhone app.

But she will have big shoes to fill in replacing Seymour, whose unconventional and often controversial programming decisions have made KCRW stand out within the national network of NPR stations. Over three decades Seymour turned the station into a tastemaker in music programming and other areas, often identifying talent early – and firing them often.

But what listeners will really want to know is: how Ferro sounds. Seymour was famed for her gravelly New York voice and effective harangues during pledge drives. From the looks of things, Ferro might be a different style of fundraiser.

More from the press release:

"Ferro has worked in all areas of the station’s operations, including programming, marketing, new media, technology development and fundraising since joining the KCRW staff in 1994. She first came to the station as a volunteer arts reporter in 1991. Ferro’s independent spirit impressed Seymour, who hired her as an assistant. She was promoted to Assistant General Manager in 1997.

“I’m thrilled to be able to get the opportunity to lead the best public radio station in the country and I’m excited to work with the station’s incredible staff on the challenges and opportunities in front of us. It’s a dream job,” Ferro said.