Reeves and Gyllenhaal are the only two to have appeared on the Oscars before, although Ford’s clothes have been there many, many times. 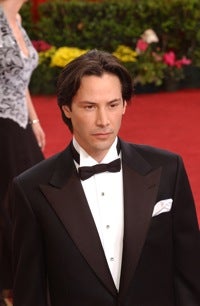 In allocating tasks for this new crop of presenters, Oscar producers Bill Mechanic and Adam Shankman might want to take note of my first Oscar encounter with one of them:

It came back in 1995, when Reeves (left), making his first appearance on the Oscar show, walked into the green room the day of rehearsals, carrying his motorcycle helmet in one hand and his script in the other.

“What are you doing?” official Oscar greeter Army Archerd asked Reeves, nodding toward the script page.

“One of the Best Picture things,” said Reeves, who’d be introducing the film clip for nominee “Pulp Fiction.”

“Is it?” asked Reeves, frowning. “I’m out there by myself. I wanted to give out an award, and be with a girl.”