McGillis is set to co-star in the upcoming romantic mystery/suspense drama “Love Finds You in Sugarcreek, Ohio,” which will premiere on cable network UP next year. The film, which began production this week, also stars “Chuck” alum Sarah Lancaster and Tom Everett Scott (“Southland,” “That Thing You Do!”).

In the film, Lancaster plays a single policewoman in the quaint town of Sugarcreek, Ohio, the heart of Amish country.  McGillis plays Bertha, one of Troyer’s three kindly Amish aunts who run a picturesque farmhouse inn.

When a mysterious, scruffy stranger named Joe (Scott), shows up on the inn’s doorstep with his five-year-old son, the aunts insist on taking in the pair. But the policewoman’s instincts reveal his surprising identity, and the fact that he’s run away from a shocking unsolved murder. 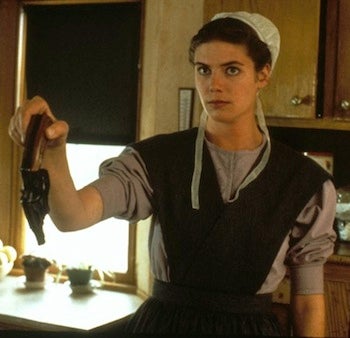 The movie is based on the novel of the same name by Serena B. Miller, with Bryar Freed-Golden writing the script.