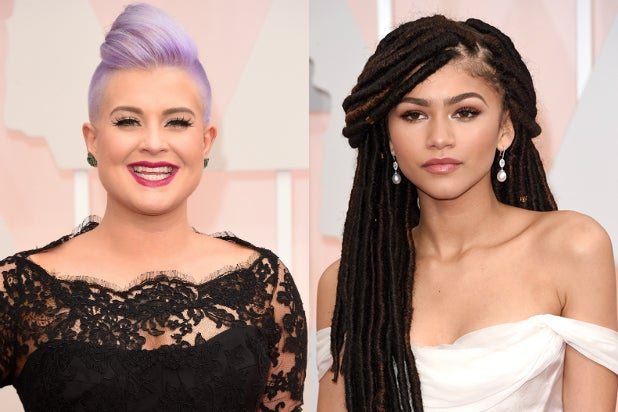 Kelly Osbourne may be considering leaving E!’s “Fashion Police” following comments her co-host Giuliana Rancic made on Monday’s show about actress Zendaya’s hairstyle at the Oscars.

Osbourne tweeted in all caps Tuesday that she did not make the comment about Zendaya’s dreadlocks that many — Zendaya included — found offensive. Osbourne added that she does not condone racism and as a result is “seriously questioning staying on the show.”

I DID NOT MAKE THE WEED COMENT. I DO NOT CONDONE RACISM SO AS A RSULT OF THIS IM SEREIOULSY QUESTIONONIG STAYING ON THE SHOW!

Osbourne’s tweet comes several hours after she refused to be “dragged into” the controversy and asserted her friendship with Zendaya.

Im giving everyone involved 24 hours to make it right or the world will hear how I really feel. contactually Im not allowed to speak!

you guys do realize that @Zendaya is my friend right?

I WILL NOT BE DRAGED INTO THIS! The situation is being rectified like ADULTS by both parties. I hope you can leave it to them & do the same!

Rancic came under fire late Monday after saying on the show that Zendaya’s hair, which was styled in dreadlocks at the Oscars, looked like it “smelled of patchouli oil and weed.”

It didn’t take long for Zendaya to respond. “To say that an 18 year old young woman with locs must smell like patchouli oil and weed is not only a large stereotype but outrageously offensive,” the actress wrote in a lengthy Instagram post, adding that “certain remarks cannot go unchecked.”

TheWrap’s requests for comment from Osbourne’s representatives and E! were not immediately returned.