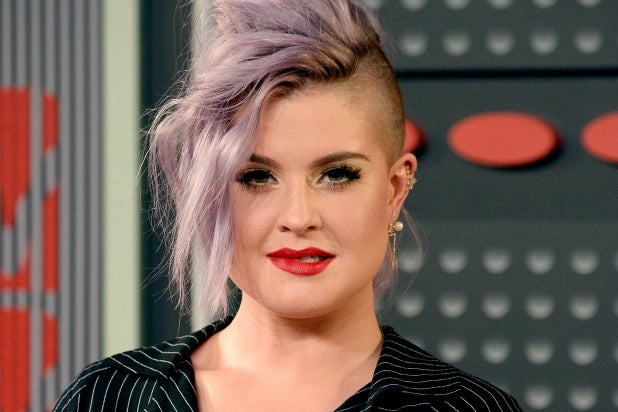 Listen up, Kendall and Kylie Jenner; a little birdie has something to tell you.

Kelly Osbourne decided to do some finger-pointing after the Jenners appropriated her father Ozzy Osbourne’s image for their line of vintage-style T-shirts.

Osbourne chose to point her finger skyward, letting Kendall and Kylie know exactly what she thought of their fashion faux pas.

In an Instagram post published Thursday, Osbourne parodied the Jenners’ T-shirt line, which included a shirt featuring one of the Jenners’ faces slapped over Ozzy Osbourne’s image. The spoof consisted of a mock-up T-shirt depicting the younger Osbourne giving the finger superimposed over the Jenners’ faces.

Kelly’s dig followed a similarly disgusted remark from her mother, Sharon Osbourne, who tweeted Thursday, “Girls, you haven’t earned the right to put your face with musical icons. Stick to what you know … lip gloss.”

The Jenner sisters yanked the line of T-shirts and apologized for them on Thursday, after drawing widespread criticism and claims that they hadn’t obtained permission to use various artists’ likenesses.

Voletta Wallace, the mother of slain rapper Biggie Smalls, tore into the reality TV duo on over a T-shirt featuring Kendall Jenner’s face superimposed over an image of her deceased son.

“I have no idea why they feel they can exploit the deaths of 2pac and my Son Christopher to sell a t-shirt,” Wallace continued. “This is disrespectful, disgusting, and exploitation at its worst!!!”

Shortly thereafter, the Jenners issued an apology and vowed to stop selling the shirts.

“These designs were not well thought out and we deeply apologize to anyone that has been upset and/or offended, especially to the families of the artists,” the social-media mea culpa read. “We are huge fans of their music and it was not our intention to disrespect these cultural icons in anyway [sic]. The tee shirts have been pulled from retail and all images have been removed.”

Girls, you haven’t earned the right to put your face with musical icons. Stick to what you know…lip gloss. pic.twitter.com/BhmuUVrDBn

19 Families Exploited for Reality TV Stardom: 'The Osbournes' to 'I Am Cait' (Photos)

Nick Lachey of “Lachey’s Bar” and Caitlyn Jenner of “I Am Cait” join the list of celebrities who exposed loved ones to the public eye, for better or worse

Black Sabbath rockstar Ozzy Osbourne and his manager-wife Sharon were one of the first star families to open their home to cameras. The show was expected to return for another season in 2015, but MTV scrapped the plans.