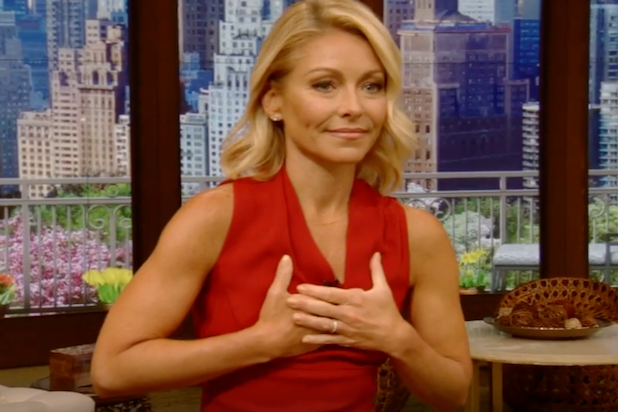 They’ll appear in just that order Tuesday through Friday. As previously reported, her co-host on Monday — Ripa’s very first show without Strahan — is Jimmy Kimmel.

Strahan officially ended his four-year run on “Live!” this morning. The former NFL great will become a “Good Morning America” co-anchor beginning in the fall. The ex-defensive end and his ABC bosses kept Kelly in the dark over their decision, which caused a giant rift between the two on-air partners and even led to a short-lived Ripa boycott.

Now it’s time to find Ripa another new co-host, beginning with the below bunch, we suppose.

Here’s the full lineup of co-hosts and guests for next week, in ABC’s own words:

Friday, May 20: Rounding out the week as co-host is “Hawaii Five-0” star Daniel Dae Kim. Kelly and Daniel interview Blake Shelton, who also performs for the “Live” audience, and Science Bob brings some fun experiments to the studio.

“Live with Kelly” is distributed in national syndication by Disney|ABC Home Entertainment and TV Distribution. The show is produced by WABC-TV in New York and executive produced by Michael Gelman.