On Tuesday, WSL’s non-profit arm, PURE (Protecting Understanding and Respecting the Environment), announced that it is hosting a global paddle out on June 15, in honor of International Surfing Day to raise awareness of environmental issues.

“The WSL is incredibly proud to break new ground in sports in the urgent battle against climate change and ocean pollution,” WSL CEO Sophie Goldschmidt said in a statement. “We believe it’s our responsibility to be ‘all in’ in the efforts to protect the ocean and beaches amid the devastating climate crisis we all face. We invite everyone who cares about our ocean to join us.”

“I think it’s a great stance and an important message to send to people around the world,” Slater continued. “The ocean is vital to everyone, for food, for oxygen and especially to us surfers. I think everyone should make it their priority to care about this issue and make changes in their lives to help.” 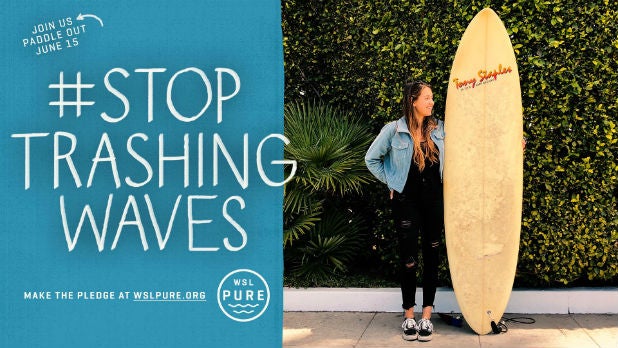 In a bid to inspire, educate and empower ocean lovers while addressing critical environmental issues, the league has committed that all its events will become carbon neutral globally by the end of 2019, eliminate single-serve plastics by the end of 2019, and leave each place better than it was found.

“In the sport of surfing and beyond, it’s imperative that we all act immediately,” Reece Pacheco, WSL SVP ocean responsibility and executive director, WSL PURE, said. “Looking ahead, we plan to inspire more and more people to join us in reducing and offsetting their emissions through our upcoming carbon calculator and offset platform.”

For more information about the WSL commitments and locations for paddle outs, visit WSLPURE.org.

What if every surfer on earth steps up their game? Let’s do this. Make the Pledge to #StopTrashingWaves at wslpure.org | #wslpure @wslpure