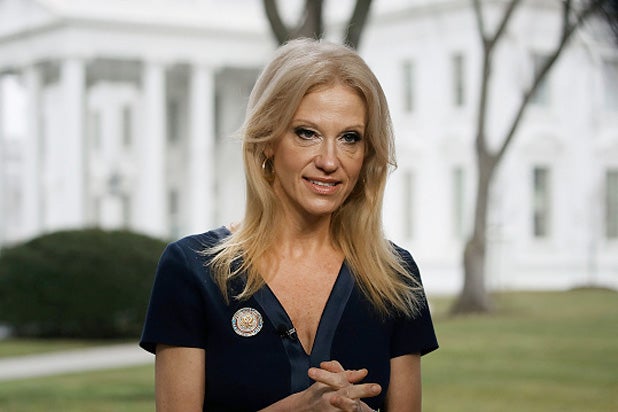 Conway, who was eviscerated this week on Twitter after a photo of her sitting on a couch in the Oval Office with her shoes on the sofa surfaced, appeared on Fox Business Network’s “Lou Dobbs Tonight” to condemn the “venomous” and “vicious” treatment she’s been subjected to.

“It is venomous, it is vicious, it bothers my children to be frank with you,” White House counselor Conway said. “I have 24/7 secret service protection because there are people out there who do wish us harm and people should take that very seriously.”

Conway suggested that the uproar was instigated by a journalist opposed to Trump, and insisted that she “meant no disrespect.”

“I am not a victim at all but people should take very seriously the import of their words,” she said, before pointing out to Dobbs, “If we started the trend here, where people are outwardly talking about greater respect for the Office of the President and its current occupants, then perhaps that’s something positive that came out.

“But I, of course, meant no disrespect … this came from a journalist who is not happy that Donald Trump is the President, but I just want people to focus on the great work of the HCBU [Historically Black Colleges and Universities] presidents and how honored we were to have them here,” Conway stressed.

The photo showed the Oval Office packed with representatives from Historically Black Colleges and Universities while Conway looked at her phone.

One critic of the photo, Wall Street Journal editor Bret Stephens, tweeted, “If Rice or Jarrett had sat like this in Oval Office conservatives would have screamed themselves hoarse for weeks. Now we own trashy.”

If Rice or Jarrett had sat like this in Oval Office conservatives would have screamed themselves hoarse for weeks. Now we own trashy. https://t.co/wFo31mqjYI

Others, however, defended Conway by noting that President Obama had put his foot up on the Oval Office desk during his tenure in the White House.

During the interview, Conway explained that her pose was the result of trying to take a photo “from a certain angle.”

“I was being asked to take a picture in a crowded room with the press behind us. I was asked to take a certain angle and was doing exactly that,” Conway told Dobbs. “I certainly meant no disrespect, I didn’t mean to have my feet on the couch.”