TheWrap magazine: ”I didn’t want him to seem like a stereotypical character that was just painted black,“ says Powers of jazz musician Joe Gardner

Kemp Powers faced a very personal challenge when writing the screenplay for his critically acclaimed 2020 film “Soul.” Pixar’s first movie with a Black protagonist tells the story of Joe Gardner, a Brooklyn music teacher who dreams of success as a jazz musician but loses his chance for an important gig when a fatal accident launches him from Earth into the world of souls.

Powers said this particular character of a Black middle-aged man living in New York and nurturing artistic dreams bore an extraordinary resemblance to himself. “I was literally the right person at the right time,” he said. “You are talking to a guy who was 45 years old at the time, and a week before I started at Pixar, I had just finished my first feature film that was going to be made, which was ‘One Night in Miami.’ I was literally living through this idea of pursuing (a dream) on nights and weekends, but not feeling satisfied, always wanting to do this other thing.”

Along with writing the script, Powers became the co-director of “Soul” (with Pixar veteran Pete Docter as director) in the course of developing the movie, making him Pixar’s first Black writer-director. Pixar’s film ideas usually grow from a director’s personal story; this one began with Docter, he said, pondering the nature of personality and how it shapes one’s dreams.

“He was exploring why, even when kids are newborns, it seems like there’s a little essence of what they are,” Powers explained. “More importantly, there was this idea of exploring purpose: What are we meant to be doing with our lives, our passions? But these ideas don’t come out fully formed. They come out very nebulous and vague.” 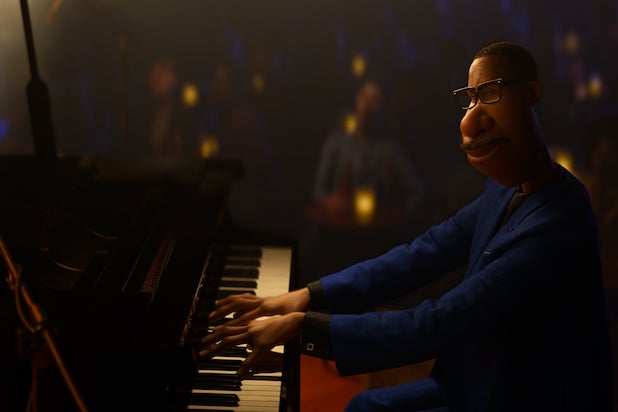 Docter and Mike Jones, who share screenwriting credit with Powers, toyed with various concepts, including making the lead character an actor who gets a role on Broadway on the day he dies. Then Docter stumbled on a quote from Herbie Hancock about the improvisational nature of jazz–and, Powers said, “locked in on jazz as a perfect metaphor for life itself.” Once they decided to make the character a jazz pianist, it made sense that he should be Black. It’s still Pete’s film and his personal story, but it’s my personal story too.”

The significance of shaping Pixar’s first Black lead character was not lost on the writer. “It would be unfair to say Soul is a ‘Black’ movie,” he said. “It’s a very universal story, but it’s absolutely being told through the prism of a Black man. Joe could have been of any race–but if Joe was going to be a Black man it was really important that he feel authentically of that group. I didn’t want him to seem like a stereotypical character that was just painted black.”

Powers said the existential themes of “Soul,” literally life and death, have not gone over the heads of children, nor are they frightened by it. “They are watching it multiple times,” he said. “For some of them, is as simple as liking the visual performance.  For others, it got them thinking and asking questions, and they are having a conversation.

“Pete is always saying he wants his movies to start conversation, and I think ‘Soul’ has done that.”