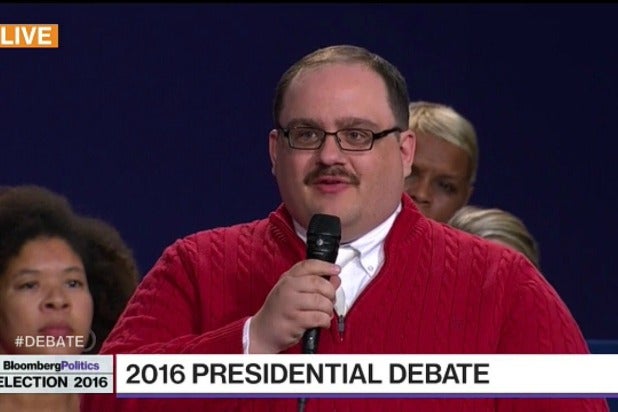 Well, he already has the name for it …

Ken Bone, the red-sweatered questioner who captured the nation’s imagination during Sunday night’s presidential debate between Donald Trump and Hillary Clinton, has been offered $100,000 to participate in “a live show broadcast” for CamSoda.com, which is billed as “the new flavor of camming.”

The offer, extended by CamSoda president Daron Lundeen, encourages Bone to “take us all to the Bone Zone and tell/show us what you’re all about.”

“In return for your participation in a live, hour-long broadcast via our site, we will pay you $100,000 and provide you with 25 throwaway cameras to use at your disposal. Who knows, maybe you’ll decide to announce you’re running for President,” Lundeen continued, according to Mediaite.

In his glasses and red sweater, Bone proved to be a highlight of Sunday’s debate, at least on social media,

“His name is Ken Bone and he ken bone me anytime,” a particularly randy admirer added.

On a less salacious note, Bone has been booked to appear on ABC’s late-night offering “Jimmy Kimmel Live!” on Monday.

At least, we’re hoping it will be less saalacious.