He is arguably the most famous documentarian in America, and he could have parlayed that fame into becoming a mogul of documentary filmdom, producing documentaries for multiple TV outlets and even theatrical release. But Ken Burns prefers the cozy environs of PBS, for which he has been producing and directing award-winning documentaries since 1981. What does he get in return for his loyalty to that one, single outlet? For him, it’s the greatest gift of all: Total creative freedom.

He also gets the kind of showcases for his work that other TV producers can only dream about. Burns’ newest documentary — a six-part, 12-hour-plus epic history of the U.S. national park system, “The National Parks: America’s Best Idea” — will premiere Sunday, Sept. 27, and dominate PBS primetime for six consecutive evenings. He talked to The Wrap about why he prefers to keep things small and what’s up next.
“National Parks,” with its placid scenes of great natural beauty, seems to stand in stark contrast to your last documentary series, “The War.” What do they have in common for you?
The commonality is America, the big event. The Second World War and the national park idea — which has been an evolving one for 150 years — reveal ourselves to ourselves. But against that backdrop of tranquility and spectacular natural settings is a history — and I want to emphasize that this is a history, not a travelogue or a nature film. 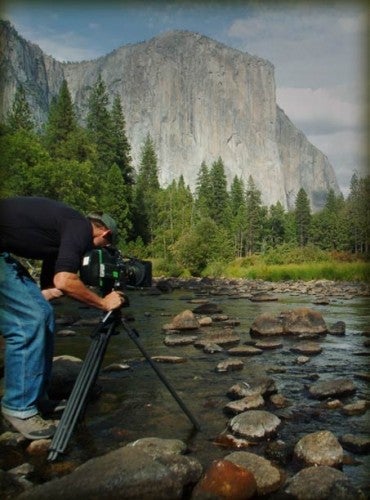 Most of your other films contain so much conflict…
There is unbelievable conflict. The story of how the parks got created is one of unbelievable drama and tension and conflict and incredible diversity of characters. You know, human beings — Americans in particular — are acquisitive and extractive beings. They look at a river and think dam. They look at a stand of beautiful trees and think board feet. They look at a canyon and wonder what mineral wealth can be extracted from it.
We tell the story of those people who were able to arrest that tendency, to swim against the tide and to establish these places that would be set aside for the first time in human history. It could only have come from a democratic people trying to figure out how you rule yourself.
It sounds expensive to produce, on a PBS budget.
It’s our most expensive production to date. It’s about $15 million, and there are two incredibly obvious reasons why: We’ve worked on it for 10 years and we’ve been shooting for six and where we’ve been shooting has been from the Gates of the Arctic in northern Alaska to the Dry Tortugas in Florida, from the Hawaii Volcanoes and the National Park of American Samoa in the western Pacific to Acadia, Maine
In some cases, we filmed in places in every season, every time of day and night from every vantage [point].  Yellowstone, Yosemite and the Grand Canyon are seen at every time of day.

Certainly the market for documentaries extends far wider than just PBS these days. Why haven’t you expanded?
The key is in the word “market.” The marketplace is a wonderful, wonderful thing and is responsible for so many of the benefits that we enjoy, but the marketplace isn’t everything. It won’t come to your house at 3 a.m. when it’s on fire, it isn’t flying over Afghanistan at this moment — and it isn’t public television.

Public TV has one foot in the marketplace, but the other very proudly out of it — producing on shoestring budgets without commercial interruption and, most important for me, without any kind of interference in terms of content. It has the best children’s, the best science, the best nature, the best public affairs, the best arts, the best performance and, I’m told, the best history on the dial. And every time we make a film, tens of millions of people watch it.

And your headquarters are in Walpole, New Hampshire … population 3,594.
In my garage.

How’d you wind up there?
I moved out from New York City to this little village 30 years ago because I assumed that (1) becoming a documentary filmmaker, (2) focusing on American history and (3) on PBS, I had just taken a vow of anonymity and poverty. It was the single greatest professional decision I made — and the second greatest one was to stay there because [as time went on] I wanted to keep the same nucleus of people that I worked with, the writers, the editors, the producers, the same sort of sense that the films are handmade [and] that we would stay lean.
You have a reputation of liking to work small.
At any given moment my production company, Florentine Films, has 20 or 25 people, only five of whom are actually full-fledged, full-time people — and I’m not one of ’em. It’s kind of a zero-sum game: We don’t take on any clients, we only produce the films that we want to produce, we only produce those films for public television. We raise the money — grant money — from corporate, foundation and governmental sources for, you know, x-amount, we spend x-amount and release that film. And that’s it. Then the project’s over.
PBS is turning over more than a week’s worth of real estate to "National Parks" — six consecutive evenings consisting of a premiere episode followed by a repeat of the same episode each evening, a marathon the following weekend and a re-airing of the whole series some time next year. How do you feel about that strategy?
We’re excited by the possibility of aggregating everybody’s eyeballs at once and offering them all these different ways of seeing it. It’s a strategy that we developed back for “The Civil War” in 1990. We were told then that we would be overwhelmed and swamped by Stephen Bochco’s “Cop Rock” in the fall of 1990, but we made not only PBS and documentary history, but ratings history.
Four years later, “Baseball” was presented in exactly the same way for nine straight nights, six straight nights for “Jazz,” the highest-rated arts program in the history of PBS, and seven nights for “The War,” which equaled the “Civil War.” So this is a tried-and-true strategy.
You also have tended to put the DVDs of your shows out immediatly.
The one for "National Parks" comes out not six months later, but the morning of Sept. 28, the day after the first episode begins, so that people have them available. The companion book is out on Labor Day.
Speaking of "Baseball," I hear you’re updating it.
Being freelancers at heart, we have a lot of irons in the fire. We are halfway through editing an update of “Baseball.” It was a nine “inning” series, whose last action was 1992 … so we’re backing up to the 1992 season and moving forward more or less to the present with what we’re calling a 10th inning. That will be out next year.
What else are you working on?
We have a lot of irons in the fire. We are just beginning editing a three-part, six-hour series on the history of Prohibition. We are working on the history of the 1989 Central Park jogger case. We’re working on a massive series on the Roosevelts — Theodore, Franklin and Eleanor. We’re also beginning the early spade work on Vietnam.
And if that’s not enough, we’ve just begun shooting on a two- or three-part series on the history of the Dust Bowl before those witnesses themselves pass from the scene. So you’ll be seeing something every year and sometimes two times a year for the next five or six years — because we don’t like moss to grow on us!
x
Looks like you're enjoying reading