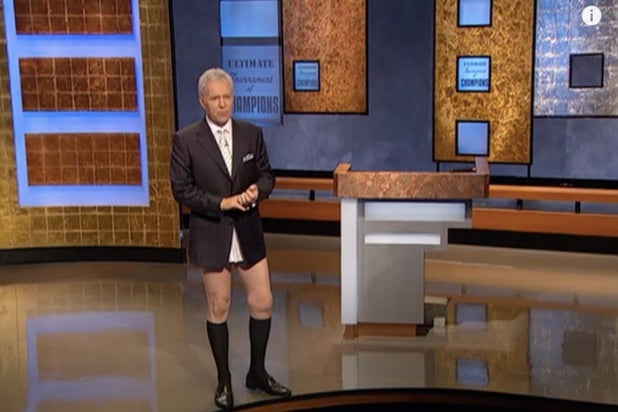 “Jeopardy!” king and current interim host Ken Jennings paid a visit to “The View” on Monday, and he shared some fond memories of late host Alex Trebek.

Among them was the hilarious story of that time during the 2005 “Tournament of Champions” when Trebek walked out on stage with no pants.

“There was a great moment in a tournament about ten years ago where the contestants were nervously talking before the show about, you know, ‘Behind these lecterns we could take off our pants and nobody would know,'” Jennings told “View” co-host Sara Haines.

“Alex must have been listening because at the top of the show, the music plays, the announcer says, ‘The host of ‘Jeopardy!’ Alex Trebek,’ and he walks out in his boxers,” he continued. “I don’t think I’ve ever laughed so hard in my life. That really, really cut the tension.”

You can watch a longer clip of the no-pants episode here.

The beloved longtime host died of pancreatic cancer on Nov. 8. His final episode of “Jeopardy!”, which was pretaped in late October, aired last week.

Starting Monday, Jan. 10, Jennings has been filling in as guest host, with Katie Couric reported to be taking over as the next temporary host.

A year ago, Jennings won the “Jeopardy! Greatest of All Time” tournament against James Holzhauer and Brad Rutter, officially taking the title of “Jeopardy!” GOAT once and for all. The show has not yet named an official successor to take over as host for Trebek.

At the end of Trebek’s final episode, the show played a montage of some of his best moments, including the no-pants episode. Catch more highlights from his goodbye episode here.

.@Jeopardy champion @KenJennings shares his favorite memory with the late Alex Trebek from their friendship of over 15 years: “I don’t think I’ve ever laughed so hard in my life.” https://t.co/cVclFZQmjA pic.twitter.com/Uosmk48bLT