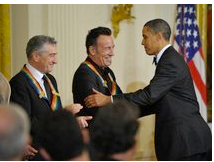 Among attendees: Jack Black, Ben Stiller, Matthew Broderick, Sharon Stone, Martin Scorsese, Barbara Walters, Frank Langella, Edward Norton, Ben Stiller, Mikhail Baryshnikov, Alan Alda, Carol Burnett, Jon Stewart, Sting,  Philip Seymour Hoffman, Joe Montagne, Les Moonves, George Stevens Jr. and Harvey Keitel.
In comments, the President said the honorees “have transformed the arts in America” — but with Brooks among the honorees, there was also some trading of quips.
At one point when Vice President Joe Biden was introduced, Brooks delivered a loud, “Wow.”
When the president went over the honorees one by one, and turned from saying, “You can’t understand America without understanding jazz. And you can’t understand jazz, without understanding Dave Brubeck” to praising the honoree “born as Melvin Kaminsky,” Brooks quickly interrupted.
“He never understood 4/4 time,” said Brooks about himself, to laughter.
Responded the president: “Mel, I’m trying to say something nice about you. Now, please don’t upstage me.”
He described Brooks as “born to entertain” — though he said that “many of the punch lines that have defined Mel Brooks’ success cannot be repeated here.”
He said he told Brooks he went to see "Blazing Saddles" when he was 10.
“And he pointed out that I think, according to the ratings, I should not have been allowed in the theater,” said the president to laughter. “That’s true. I think I had a fake ID. But the statute of limitations has passed."
The president called De Niro "one of America’s greatest cinematic actors” and praised him for his versatility, before joking that De Niro was known as “a man of few words” off screen. “I can attest to this,” the president said.
Praising Springsteen for his long career and the extent of his music, Obama described him as “still one ‘cool rockin’ daddy.’”
“When I watched him on the steps of the Lincoln Memorial when he rocked the National Mall before my inauguration, I thought it captured as well as anything the spirit of what America should be about.  On a day like that, and today, I remember:  I’m the president, but he’s The Boss.”
Obama said he also had seen Brubeck as a child in Hawaii.
“I know personally how powerful his performances can be. In the few weeks that I spent with my father as a child — he came to visit me for about a month when I was young — one of the things he did was to take me to my first jazz concert, in Honolulu, Hawaii, in 1971, and it was a Dave Brubeck concert.  And I’ve been a jazz fan ever since.  The world that he opened up for a 10-year-old boy was spectacular.”
At the ceremony which is to be telecast Dec. 29 on CBS, Brooks was saluted by Carl Reiner, Langella, Martin Short, Black, Harry Connick, Jr., Richard Kind, Jane Krawkowski, Matthew Morrison, Gary Beach and Matthew Broderick.
De Niro was saluted by Stiller, Ed Norton, Keitel and Sharon Stone.
Stiller interrupted his comments on De Niro to the presence of  “Bruuuce” Then turning to the seated president, he said, hey, “it’s the Nobel Peace guy.”
Stiller called Brooks a "pioneer. A trailblazer. He’s like the Barack Obama for short funny Jews."