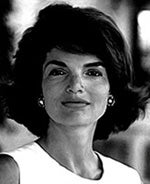 We’re inching closer and closer to a world where there is nothing related to the Kennedy Family that hasn’t been published.

The latest: a new book based on never-before-disclosed interviews Arthur Schlesinger conducted with Jackie O – edited by Caroline Kennedy — which Hyperion plans to publish in September.

Conducted in the spring of 1964 and intended for deposit at the John F. Kennedy Presidential Library and Museum—not yet in existence at the time—Mrs. Kennedy’s conversations with historian Arthur M. Schlesinger Jr. were part of a wide-ranging oral history project that captured the recollections and reflections of those close to President Kennedy shortly after his death. The seven interviews have remained strictly sealed since then in accordance with Mrs. Kennedy’s wishes.

The Kennedys plan to release the transcripts from the interviews and six-and-a-half hours of audio as part of the 50th anniversary celebration of the Kennedy Administration.

The interviews cover a wide range of subjects from John F. Kennedy’s early campaigns to the Cuban Missile Crisis, including Mrs. Kennedy’s evolving sense of herself and her role as First Lady; family and married life in the White House; and President Kennedy’s plans for a second term.

All of which means you can just about lock up a Jackie O Vanity Fair cover for August.