Sky Atlantic released a first-look teaser for “This England” starring Kenneth Branagh as Boris Johnson, and it is hard to recognize Branagh under the prosthetics and makeup.

Photos of Branagh as Johnson accompany a video snippet of the series.

The Sky Original drama is co-written and directed by Michael Winterbottom. The series, first named “This Sceptered Isle,” is based on Boris Johnson’s first months as UK Prime Minister, showing how the first wave of the COVID-19 pandemic hit Britain.

Alongside Branagh, who won the Best Original Screenplay Academy Award for “Belfast” this year, Ophelia Lovibond will star as Carrie, and Andrew Buchan will play Matt Hancock.

Highlights of the plot include Johnson’s dealing with COVID-19, Brexit, and the overlapping of his personal and political lives. Government settings alternate with threads of people around the UK, from scientists attempting to beat the virus, healthcare workers on the front lines trying to contain the spread and other citizens whose lives were drastically changed.

This England is produced by Michael Winterbottom’s Revolution Films and Richard Brown’s Passenger. The series will air on Sky Atlantic and streaming service NOW later this year. 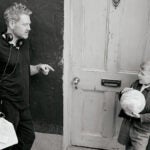