Kenneth Branagh has proved himself a master of transformation over the years, from becoming Hamlet to Gilderoy Lockhart. But as U.K. Prime Minister Boris Johnson in Sky’s upcoming series “This Sceptred Isle,” Branagh is nearly unrecognizable.

Sky released the first image of Branagh as Johnson on Thursday, showing the actor sporting Johnson’s trademark blond hair, and what looks to be prosthetics to fill out his face.

“This Sceptred Isle” will be a five-part limited series that will track the events of the early days of the COVID-19 pandemic in the U.K., and how Johnson handled the first wave of the crisis for his country.

The series, co-written by Michael Winterbottom — who will also direct all five episodes — and Kieron Quirke, is based on first-hand testimony from those directly involved in handling the COVID response, including hospitals and care homes, Number 10 Downing Street, the Department of Health and The Scientific Advisory Group for Emergencies. 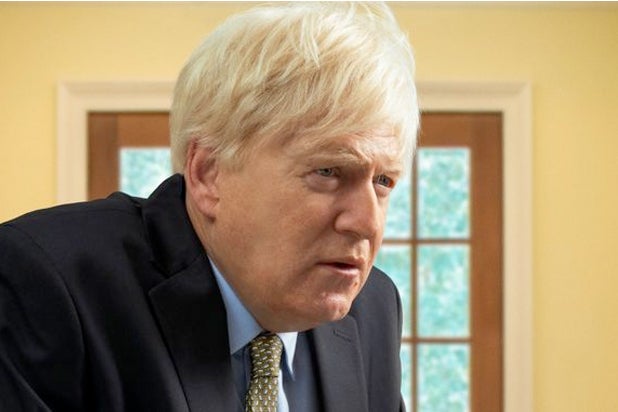 Branagh’s casting as Johnson was announced late last month; Branagh himself is just four years older than the prime minister.

“This Sceptred Isle” will begin with Johnson’s arrival at 10 Downing Street in July 2019, and  follow the prime minister through his own diagnosis and hospitalization with COVID last fall, along with the birth of his son and the impact of the first wave of the pandemic on Britain as a whole.

“The first wave of the COVID-19 pandemic will be remembered forever. A time when the country came together to battle an invisible enemy. A time when people were more aware than ever of the importance of community,” Winterbottom said in a statement following Branagh’s casting. “Our series weaves together countless true stories – from Boris Johnson in Number 10 to front line workers around the country — chronicling the efforts of scientists, doctors, care home workers and policy makers to protect us from the virus.”

The series is set to premiere on Sky Atlantic across all Sky territories in Autumn 2022.