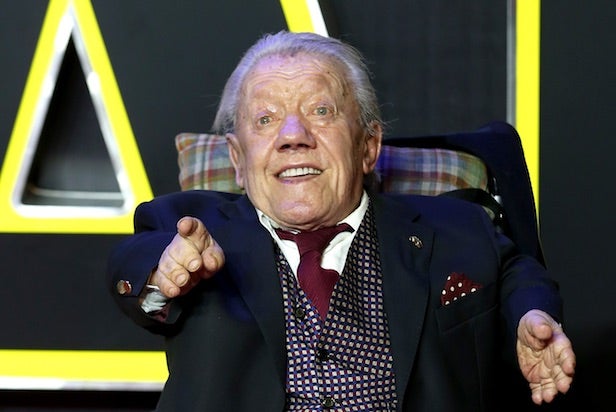 Kenny Baker, the actor who brought life to R2-D2 in the “Star Wars” films, has died, his niece said on Saturday. He was 83.

Baker — who appeared in six of the “Star Wars” films as well as documentaries relating to them — had problems with his lungs for many years and was often in a wheelchair.

His niece, Abigail Shield, told the Guardian he was doing “very poorly for a long time.”

Also Read: New 'Rogue One: A Star Wars Story' Trailer Was Great, But I'm Still Worried About the Movie (Commentary)

“He was asked to go out to L.A. for the new ‘Star Wars’ premiere but he was told he was too ill to travel,” Shield told the Guardian “Luckily he did manage to meet George Lucas again when he came to Manchester.”

His niece added: “It was expected, but it’s sad nonetheless. He had a very long and fulfilled life. He brought lots of happiness to people and we’ll be celebrating the fact that he was well loved throughout the world. We’re all very proud of what he achieved in his lifetime.”

Also Read: ABC Boss 'Would Absolutely Love' to Have 'Star Wars' Series on the Network

But the plucky R2-D2 — part handyman, part hacker, all lovable, irascible droid — was his most memorable role by far. R2 personified the “Star Wars” universe, in which rebels with ramshackle technology manage to overwhelm a sleek, destructive Empire.

Although the onscreen partnership of R2-D2 and Anthony Daniels’ statuesque golden android C-3PO is celebrated, off screen the two actors had a bickering relationship that has reached mythological proportions.

To sum it up, Baker and Daniels couldn’t stand each other.

“Anthony doesn’t mix at all — he keeps himself to himself,” Baker once told Hollywood.com, “He never wants to have a drink with any of us. Once when I said hello to him he just turned his back on me and said, ‘Can’t you see I’m having a conversation?’ I was blazing with rage.

“It was the rudest thing anyone had ever done to me. I was furious. It was unbelievable,” he said.

Baker went on to explain: “By the time Anthony is in his costume I don’t see him. I turn up five minutes before filming starts and they pop me into the R2-D2 shell. There’s no talking once you’re inside.

“He’s had 30 minutes getting out at the end and by that time I’m away. We never meet socially — we don’t live anywhere near each other.”

Baker started performing in 1950 at the age of 16 when he joined the Burton Lester’s Midgets as a performer.

Shortly after, he joined Billy Smart’s Circus as a clown and shadow ringmaster. Later in his career, he toured the country for nine years doing pantomime and ice shows, at which time he met the queen. He went on to form a musical comedy act: The Mini Tones.

Baker, like the droid he played, was celebrated for the outsize joy he brought to the galaxy.