Her biggest fear? Falling over on air. “That would be the most embarrassing thing ever,” she told TheWrap, pledging to wear wedges over high heels.

Still, Eurton (above right with actress Elizabeth Banks) said she’s confident that she’ll make it through the 144th annual event. “This is probably the two most exciting minutes in sports and having grown up in the industry, it is something I’ve been following my entire life,” she said.

Eurton also explained how this year’s favorite, Justify, could break a 135-year streak in Louisville, Kentucky, this weekend. If he wins under veteran jockey Mike Smith, Justify would become the first horse since Apollo in 1882 to win the most historic horse race in the world after not racing at age 2.

And Eurton believes the 3-year-old colt has a great chance of following in American Pharoah’s hoof-steps by winning the Triple Crown — the Derby, Preakness and Belmont Stakes — if he’s victorious in the Run for the Roses.

“Justify can beat any type of horse. I do feel that if he wins the Derby, he could win it all. He could be the next American Pharoah, that is the kind of buzz surrounding him,” Eurton said.

“It unbelievable to see where Mike Smith is at his age — I couldn’t think of a better person to navigate the Derby on Justify. He is the Tom Brady or Kobe Bryant of horse racing,” she said of the 52-year-old jockey.

Eurton has some other tips for anyone hoping to win a few bucks betting on the Derby. “I really like Bolt d’Oro [ridden by Triple Crown winner Victor Espinoza] … there’s something about Bolt that fits the Derby — he is the type of horse where nothing bothers him, his trainer says you have to wake him up from a nap for the race. He is cool, calm, collected and can handle anything.”

Overall, she thinks it’s the strongest field we’ve seen in a long time: “There are so many horses who have the potential to be great and they are all so evenly matched right now.” 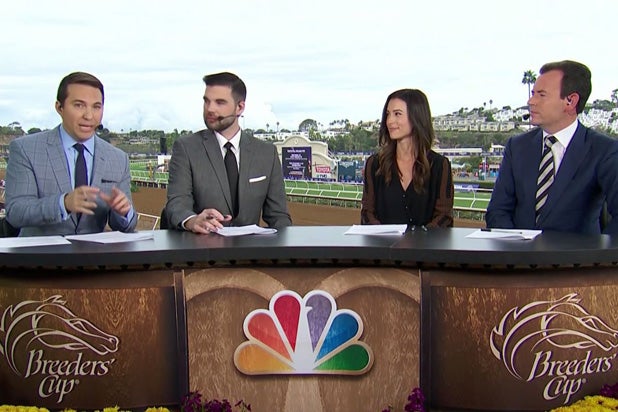 She will be bringing viewers a behind-the-scenes look at the key players leading up to the 6:34 p.m. ET post time. “I will spend a lot of time interviewing trainers, owners and jockeys, relaying the stories behind these contenders. To me, that is one of the most exciting things about the Derby because getting into that starting gate is half the battle,” she said.

“If you only tune into the race, you don’t get to see those connections or attach yourself to a horse … to find out why people loved California Chrome so much because he came from a small beginning, or on the flip side, American Pharoah, who everyone grew to love him because he was such a puppy dog.

“I’m hoping that even just by watching the race, viewers take away some information on the sport,” she added. “The key is always getting to people to love it, once you are in you won’t leave.”

While she isn’t worried about transferring her lifetime of experience at the track and years on TVG to the millions of NBC viewers watching Saturday. “I will prep exactly the same but when it comes to questions, I will make it more for a public audiences,” she said.

Surprisingly, the one thing Eurton doesn’t do is actually ride horses. “It is something my parents never got me involved in. My dad was a jockey and then he got too big, so he became a trainer and took over my grandfather’s stable, but I grew up playing soccer and dancing,” she said.

“When people look at me, they think I could be a jockey because I am not very big,” she said, admitting that last time she was on a horse, her feet came out of the stirrups and ended up “bouncing around, holding on for dear life!”

NBC Sports coverage of the Kentucky Derby begins at noon ET on Saturday, switching over to NBC at 2:30 p.m. ET.