“Scandal” ended last April — and so did Kerry Washington’s weekly live-tweeting sessions with the TGIT staple’s fans a.k.a. Gladiators. Apparently that lack of weekly discussion with viewers has the Shondaland alum missing fan interaction to the point that she’s decided to give out her phone number.

Yes, you can now text Olivia Pope herself and she might actually respond.

Here’s what Washington said in the video she posted to Twitter on Thursday, giving out her number:

Hi, you guys! So you know how private I am, but I’m going to do something crazy — I am going to give you my phone number, which I know sounds insane. But, you know, I posted about this last week, I’ve been missing that TGIT love. We used to come together every Thursday night at the same time and the same place and I would know where you were you would know where I was and we would talk about stuff that really mattered to use and be in a community together. And I want to bring some of that back ’cause I miss you guys and social media is amazing but sometimes it’s hard to sift through and really connect with the people who matter to you most. So, I’m giving you my number. It’s 718-400-7118. Shout-out to the Boogie Down Bronx. And I really want you to text me. I want you to ask me questions, I’m gonna send links like special sneak peeks. You guys are gonna be the people I’m closest to in terms of trading information,=. So text me, really, really text me. And yay.

TheWrap called the number and was sent to a voicemail message from Washington saying that she does not check that inbox and encouraging callers to instead text her. When you text Washington, you’ll get a message prompting you to click a link to “sign up” so you can be added to her contacts and she can “respond to you directly.” When you fill out the form via Community.com, then you get a followup message welcoming you to Washington’s “community.”

See a screenshot of those here: 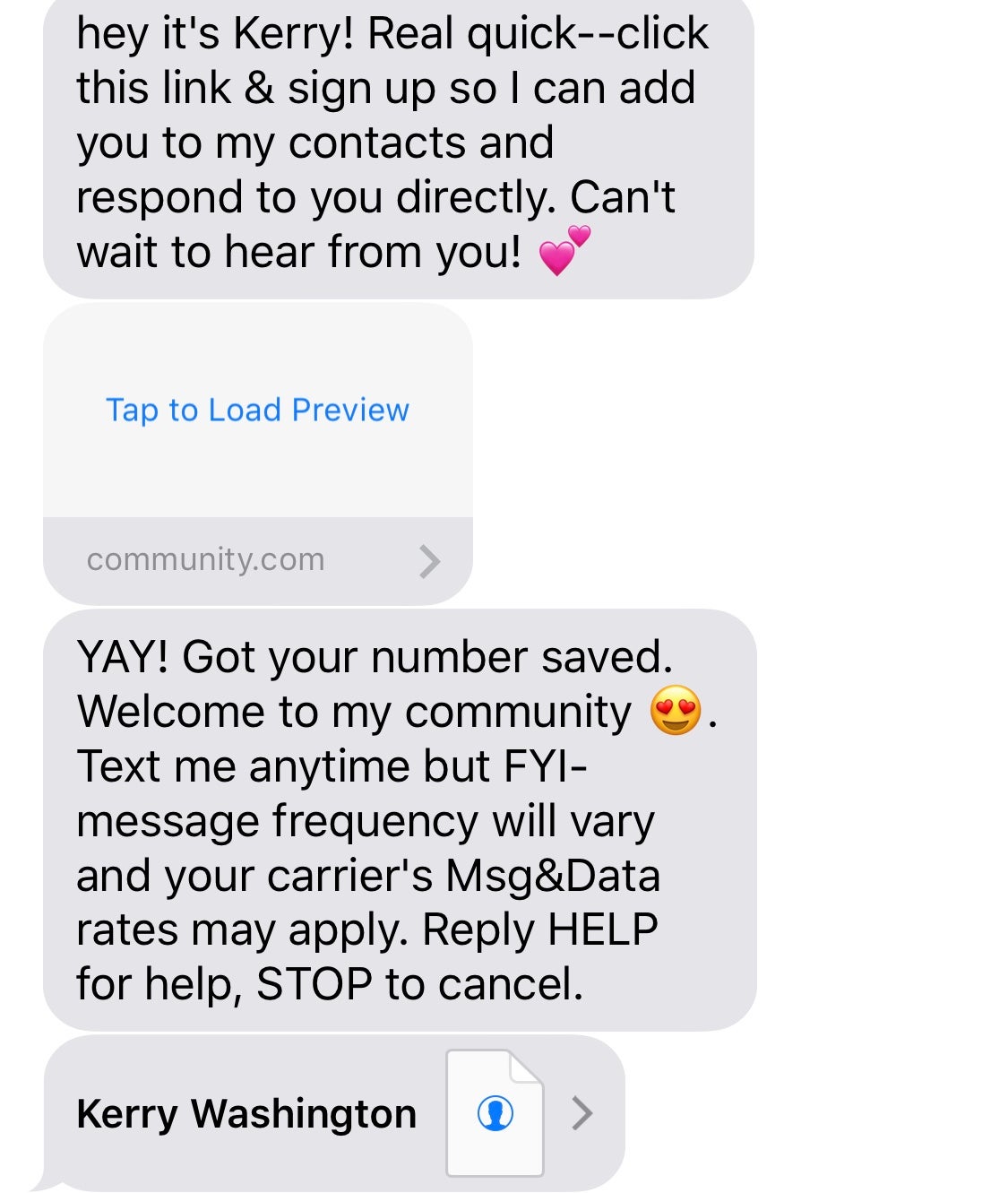 TheWrap did not immediately hear back from representatives for Washington on Friday when we reached out to ask how many calls and texts the actress has received in the last 24 hours, if this is her real phone number or if she’s using a particular platform/app for the texting (as suggested by the redirect to Community.com), and if she is storing the numbers. We also asked if this is all part of a promotion for a bigger project Washington is working on.

See below for tweets from Washington about her text exchanges with fans so far.

WOW! You guys are amazing!!! I'm getting so many texts on this new platform. I'll try my best to respond when I can but keep them coming!! 😍

You guys. This is nuts!!!! So many texts. Forgive me if I didn’t get to everybody today. But I’m soooooooo happy you texted. This is CRAZY exciting. AND YES ITS REALLY ME pic.twitter.com/l6kYuzRk4k