‘I’m overjoyed,” Harris said after the ceremony. “There’s so much about what’s happening in the world now that is presenting some of the worst of this moment and human behaviors, and then we have a moment like this that I think reminds us that there is still so much yet to accomplish and that we can accomplish, including a day like today that is so historic and so important.” 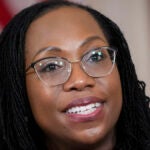 Some had other angles to add to their well wishes.