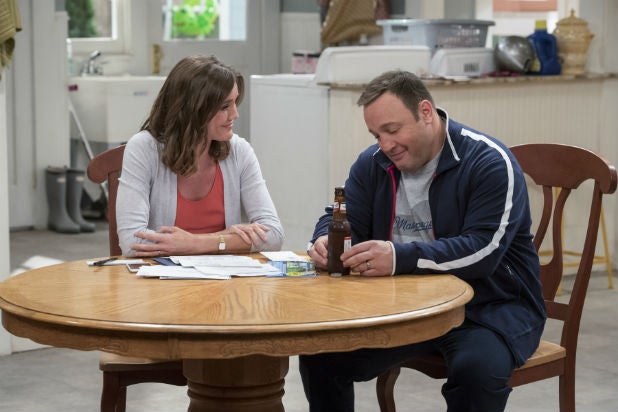 Considering the successful run of “The King of Queens” on CBS back in the day, it’s no surprise that Kevin James is back again on the network in another multi-camera comedy, playing essentially the same regular-guy character.

This time, James plays Kevin, a recently retired police officer living in Massapequa, New York, with his wife and three kids.   Like Doug Heffernan, the lovable lug on “King of Queens,” Kevin is a happy-go-lucky guy who likes to eat and have a good time. He has a trio of buddies, also recently retired cops, and his wife is Donna, played by Erinn Hayes (“Childrens Hospital”). Like Leah Remini, James’ wife on “The King of Queens,” Donna is the sensible member of this partnership.

There’s also Gary Valentine, James’ brother in real life, who has been upgraded from Cousin Danny in “The King of Queens” to Kevin’s firefighter brother Kyle. Love him or hate him, James is a comedy brand, as his “Paul Blart” movies showed. And like Lucille Ball and Bob Newhart before him, he understands the value of sticking with the familiar. So does CBS.

We already know this Kevin, and he has the audience (or much of it, anyway) firmly on his side. So, when Kevin’s older daughter Kendra (Taylor Spreitler) announces she is dropping out of college and marrying her unemployed boyfriend Chale (Ryan Cartwright), the stage is set for macho Kevin to comically conflict with this soon-to-be new member of the clan. As the pilot episode moves forward, Kevin realizes retirement may not be exactly what he thinks. No surprise there.

“Kevin Can Wait” works hard on its street cred. Smack in the middle of the pilot is an inside, knowing reference to All American Hamburger, a staple of the Long Island community. And the local filming of Kevin, Kyle and their buddies as they combine go-kart racing and paintball at the end of the episode (complete with Levitt houses in the background, another Long Island fixture) also give the show a real-world authenticity.

Unlike the trendy single-camera comedies that tend to find favor with the critics but often fall short with viewers, “Kevin Can Wait” is a painless, thoroughly mainstream outing, complete with generic jokes and a familiar ensemble.

Also Read: Kevin James on Why His Lionsgate Comedy Fell Apart: 'It Was Such a Rushed Process'

Unless viewers en masse flock to ABC to see if Ryan Lochte will get attacked again on competing “Dancing With the Stars,” this sitcom is virtually guaranteed initial audience sampling. It initially airs after “The Big Bang Theory” in the Monday 8:30 p.m. half hour for the first few weeks, before anchoring Monday at 8 p.m. with the new sitcom “Man With a Plan” with Matt LeBlanc.

When “The King of Queens” premiered,  attention was focused on CBS’  sitcom smash  “Everybody Loves Raymond.” Few critics or industry insiders seemed to care – or notice – “The King of Queens” was even on the air. Yet respect is due: the show ran for nine seasons and 207 episodes. While Emmy is unlikely to start handing out Emmys to James and his crew, and the critics aren’t likely to toss bouquets, there is still value in a sitcom that middle America can relate to. While nine seasons for “Kevin Can Wait” might be a stretch at this point, “generic” shouldn’t be a dirty word on broadcast TV.