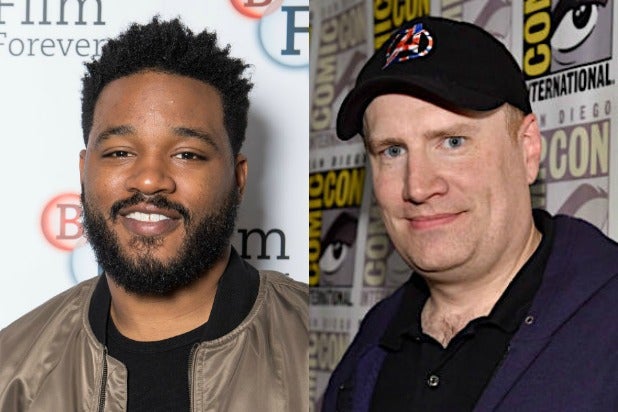 Marvel Studios was already a Hollywood titan before “Black Panther” began shooting, but CEO Kevin Feige credited director Ryan Coogler and his team for making his company “a better studio.”

“The experience of making ‘Black Panther,’ even before it came out, was a transformative one,” Feige told attendees at the 10th annual Produced By conference on Saturday. “We’re watching the final playback, where you see the final film and check for any last-minute changes, and when it ended I just instinctually leaned over to Ryan and said, ‘I think this is the best movie we’ve ever made.'”

“Black Panther” is now one of the top 10 highest grossing movies of all time, and the only one on the list where more than half of its global revenue came from North America with nearly $700 million grossed domestically.

More than any other Marvel Studios release, the film has become a crossover cultural phenomenon, with politicians recognizing the film in Congress and black athletes and celebrities adopting the film’s “Wakanda Forever” salute, which Feige said Coogler improvised with the film’s star, Chadwick Boseman.

“We had to make that movie to destroy a myth that Black movies don’t succeed around the world,” Feige said, “Unconscious bias is a real thing.”

Feige also said that producing “Black Panther” made him more aware of what kinds of people were surrounding him during the moviemaking process, and how that group is steadily diversifying. He said that during a production meeting for the film, every person sitting in the meeting with him “didn’t look like me, and that was exciting.”

As Marvel Studios enters its second decade in the business, Feige says that the push for diversity that entered overdrive with the release of “Black Panther” has lead to steady changes. Anna Boden will become the first woman to direct a Marvel film as she is currently filming “Captain Marvel” with Ryan Fleck, and Feige says there are plans to put more women in director’s chairs and other leadership roles as well.

“At this point, there are more women on track to take leadership at Marvel Studios then there are men.”

“Captain Marvel” will be released on March 8, 2019. The next Marvel Studios film, “Ant-Man and The Wasp,” which will be the first Marvel film with a female hero in the title, will hit theaters next month.