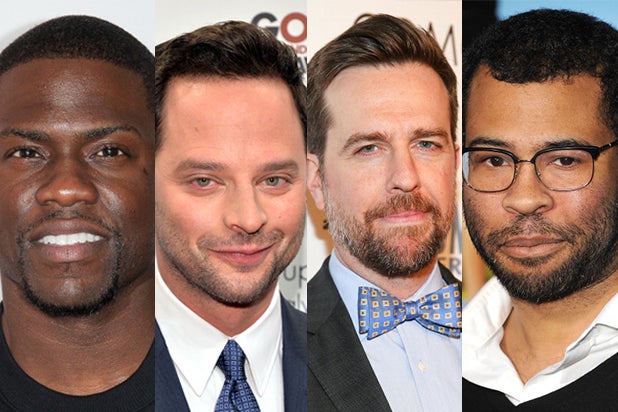 Fresh off the record-breaking success of “Ride Along,” Kevin Hart has signed on to voice one of the lead roles in DreamWorks Animation’s “Captain Underpants” along with fellow comedy superheroes Ed Helms, Nick Kroll, Jordan Peele and Thomas Middleditch, TheWrap has learned.

Rob Letterman (“Monsters vs. Aliens”) is directing from a script by Nick Stoller (“The Muppets”), who adapted Dav Pilkey’s popular book series. DreamWorks Animation’s Damon Ross will oversee the film for the studio.

Hart and Middleditch will voice scheming fourth graders George Beard and Harold Hutchins, who love playing pranks, hiding in their secret treehouse and writing comic books. But when they accidentally bring their favorite comic book character, Captain Underpants, to life through a hypnosis accident involving their megalomaniacal principal Mr. Krupp (Helms), their elementary school life becomes anything but elementary.

Also read: Women Flocked to Record-Breaking ‘Ride Along’ — Do They Heart Kevin Hart?

“These actors are some of the funniest around today. Letting them loose with these characters is sure to be a hysterical ride,” Letterman said.

Since 1997, 10 bestselling “Captain Underpants” books have been released in over 20 languages, with over 70 million books in print around the world. Three more books chronicling the waistband warrior’s latest adventures are planned through 2016.

Hart currently stars in Universal’s “Ride Along” and can also be seen in WB’s “Grudge Match.” While “Captain Underpants” will be his first animated film, he has a quartet of live-action films on the horizon including “About Last Night,” “Think Like a Man Too,” “The Wedding Ringer” and Chris Rock‘s “Finally Famous.” He’s repped by UTA and 3 Arts Entertainment.

Helms will soon be seen in David Wain’s comedy “They Came Together,” which debuts at Sundance later this week. Best known for “The Office” and “The Hangover” trilogy, Helms recently co-starred in the surprise hit “We’re the Millers.” He’s repped by CAA and Principato-Young Entertainment.

Kroll has his own show in Comedy Central and does double duty as one of the stars of FXX’s fantasy football sitcom “The League.” He’s currently working on the comedy “Brother’s Keeper” with Rose Byrne and Bobby Cannavale. He’s repped by WME and Mosaic.

Middleditch is a rising comic who can currently be seen in Martin Scorsese’s “The Wolf of Wall Street” and next stars in the Universal comedy “Search Party.” He’s repped by WME, Kirsten Ames Management and attorney Isaac Dunham.