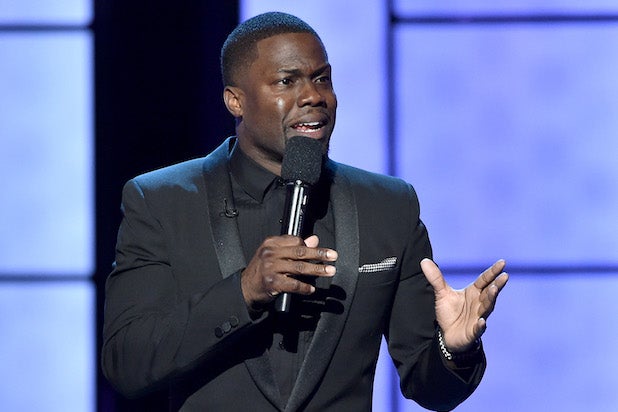 GLAAD, the nation’s largest LGBTQ advocacy group, said it never intended for Kevin Hart to step down as host of the upcoming Oscars after homophobic social media postings resurfaced this week, but instead said the comic should have used the moment to raise awareness.

“Kevin Hart shouldn’t have stepped down; he should have stepped up,” GLAAD president and CEO Sarah Kate Ellis said in a statement to TheWrap Friday. “Hart’s apology to LGBTQ people is an important step forward, but he missed a real opportunity to use his platform and the Oscars stage to build unity and awareness.”

Ellis said that the organization, which serves as an LGBTQ media watchdog, would “still welcome that conversation with him.”

“The Academy has recently made significant strides in featuring diverse talent onstage and they should now double down on that commitment as they look for a new host,” she said.

Hart drew ire after scrubbing his social media feeds from old anti-gay tweets, including one in which he seemed to advocate violence against his own son should he exhibit gay tendencies.

In an interview with CNN Thursday morning, Ellis said that she was hoping to turn the incident into a “teachable moment.”

“This wasn’t the conclusion I think everyone would have liked,” Ellis told anchor Erica Hill.

GLAAD President and CEO Sarah Kate Ellis on why she was hoping Kevin Hart wouldn’t step down as Oscars host:

“We were hoping that this was going to turn into a teachable moment … [and] to use the Oscar stage … to help build unity and awareness.” https://t.co/Kt5qT05hAA pic.twitter.com/PNijmSM2Vv

Hart stepped down late Thursday night, apologizing for the homophobic comments after he said the Academy gave him an ultimatum to apologize or give up the hosting gig.

“I have made the choice to step down from hosting this year’s Oscar’s….this is because I do not want to be a distraction on a night that should be celebrated by so many amazing talented artists,” Hart said on Twitter.

“I sincerely apologize to the LGBTQ community for my insensitive words from my past,” he said.

Reps for the Academy have not responded to requests for comment.

The imbroglio started after Guardian editor Benjamin Lee tweeted out screen grabs of some of Hart’s now-deleted messages on Twitter, including one from 2011 in which he wrote: “Yo if my son comes home & try’s 2 play with my daughters doll house I’m going 2 break it over his head & say n my voice ‘stop that’s gay.”

A longtime GLAAD board member, Anthony Watson, who noted that he did not speak on behalf of the organization, called for Hart’s firing.

“I’m sick and tired of homophobes who are called out for their vile behavior and instead of apologizing they make light of what is an incredibly dangerous situation,” Watson said. “Literally hundreds of LGBT people around the world are murdered for who they are. Kevin Hart’s lack of an apology and lack of understanding speak volumes, in particular his condoning violence against his own children should they be blessed with being gay.”

Chad Griffin, the president of The Human Rights Campaign, the largest LGBTQ advocacy group in the country, responded to Hart’s tweet telling the comedian: “You have a rare opportunity to take responsibility, teach people in this moment, & send a message to LGBTQ youth that they matter & deserve dignity & respect. You say you’ve grown. Show us. Make amends for hurtful things you’ve said & affirm LGBTQ people.”

Hart has a long history of making homophobic jokes. And now, it seems, those jokes seem to be coming back to haunt him.

On Wednesday, BuzzFeed’s Adam Vary tweeted a scrolling video of dozens of Hart’s anti-gay tweets, which he grabbed after seeing Lee’s initial tweet.

“I did a search for every time Kevin Hart tweeted “f-g,” “homo,” or “gay,” Vary wrote. “It was…a lot. And he seems to have basically stopped tweeting those words after 2011 — i.e. the year his first stand-up movie became a hit.”

After seeing this @benfraserlee tweet, I did a search for every time Kevin Hart tweeted "fag," "homo," or "gay." It was…a lot. And he seems to have basically stopped tweeting those words after 2011 — i.e. the year his first stand-up movie became a hit. https://t.co/P8nTOilFgx pic.twitter.com/6uzPhnvt4F

In an article for The Guardian, Lee wrote about Hart’s anti-gay history, which includes a 2010 stand-up routine in which the comedian said: “One of my biggest fears is my son growing up and being gay. That’s a fear. Keep in mind, I’m not homophobic, I have nothing against gay people, be happy. Do what you want to do. But me, being a heterosexual male, if I can prevent my son from being gay, I will. Now with that being said, I don’t know if I handled my son’s first gay moment correctly. Every kid has a gay moment but when it happens, you’ve got to nip it in the bud!”

This isn’t the first time the Academy has faced this problem.  In 2011 the Oscars fired Brett Ratner as producer of the 84th Academy Awards after using the word “f-gs.”