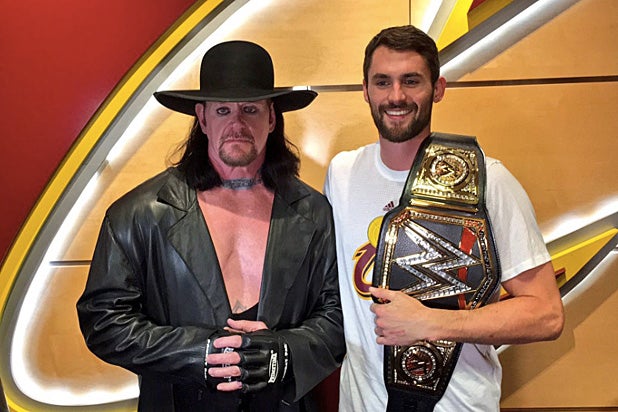 There was plenty of sports magic in Cleveland Tuesday, and some of it was hand-delivered by WWE icon The Undertaker.

Along with the Cleveland Indians taking on the Chicago Cubs in Game 1 of the World Series, and the Cavaliers being presented with their first ever NBA championship rings — Kevin Love got a WWE title belt hand-delivered to Quicken Loans Arena.

The Cavs power forward was presented with the pro wrestling hardware by The Undertaker, former WWE Divas champion Michelle McCool and Dana Warrior, the widow of the late Ultimate Warrior, Yahoo Sports reported.

The blending of sports on Cleveland’s biggest night came after Love rocked a WWE championship belt during the Cavs’ victory parade last June in front of thousands of fans.

“The WWE was nice enough to give us an authentic, world heavyweight championship belt for the 2016 NBA Champion Cleveland Cavaliers,” Love said at the time, according to Fox Sports. “I had the Stone Cold Steve Austin ‘Smoking Skulls’ belt. It was an amazing Game 7, smashed some beers along, and now they sent this belt along. Everybody’s loving it.”

Also Read: WWE's Nikki and Brie Bella on Why 'Total Bellas' Is Nothing Like Other Reality Shows

MVP LeBron James was also spotted wearing an Ultimate Warrior T-shirt when the team arrived at Cleveland Airport with its championship trophy. Some fans thought he was flaunting their victory over the Golden State Warriors — but maybe the Cavs are all just massive WWE fans.

He had been inducted into the WWE Hall of Fame only a few days before and made his first “Raw” appearance in almost 18 years the day prior to his death. Warrior collapsed while walking to his car in Scottsdale, Arizona, with wife Dana. A subsequent autopsy revealed that he died of a heart attack caused by atherosclerotic cardiovascular disease.

The Cavaliers take on the New York Knicks in their first game of the 2016 NBA season on Tuesday.