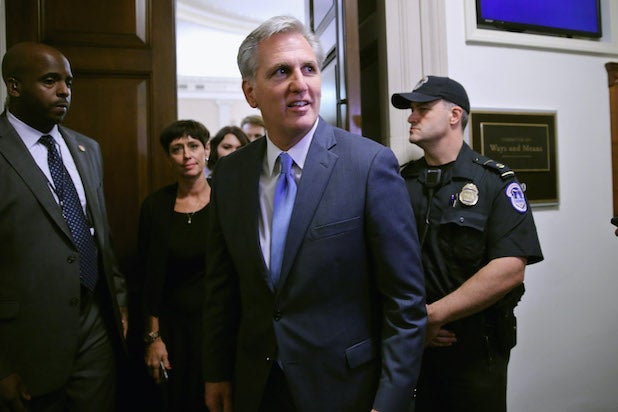 House Minority Leader Kevin McCarthy (R-Calif.) has called on ABC News president James Goldston to explain why the network declined to broadcast a 2015 story that Amy Robach had reported about the late financier and convicted sex offender Jeffrey Epstein.

On Sunday, the California congressman called out ABC News in a letter to Goldston, which was first obtained and shared by Megyn Kelly, for its decision to scrap the story, which was revealed this month in hot-mic footage of Robach leaked by Project Veritas. In the video, Robach said the story was “quashed” after she spoke with an Epstein accuser who told her “everything.”

“What appears to have been presented to Ms. Robach is first-hand evidence of human trafficking,” McCarthy wrote in the letter, which was also signed by Reps. Mike McCaul (R-Texas) and Doug Collins (R-Ga.). “I am deeply concerned that this victim, in search of justice, went to ABC News, provided information and an interview, and then ABC News chose to bury the truth. This was a decision that Ms. Robach alluded was due to protecting powerful people or financial interests.”

The letter continues: “Although it is unclear whether anyone thought to alert authorities to further examine these deeply disturbing allegations, it is clear that ABC News’ enabling of Mr. Epstein has consequences: fewer victims willing to come forward to bring perpetrators of this modern-day slavery to justice and, more grievously, the possibility that any number of minors could have been spared from human trafficking over the past three years.”

Representatives for ABC News and McCarthy’s office did not immediately respond to TheWrap’s request for comment on the letter.

McCarthy did not indicate what authority Congress — or members of Congress in the minority — had to investigate the internal operations of a news organization, which ordinarily claims broad protections both under the First Amendment as well as protection of trade secrets.

According to the letter, McCarthy seeks answers from ABC News on the following questions: