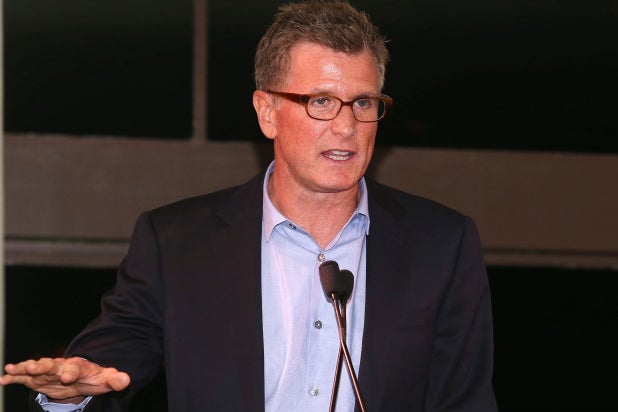 Kevin Reilly has officially been named president of TBS and TNT, as well as chief creative officer for Turner Entertainment.

Tuesday’s announcement comes as no surprise; a day earlier TheWrap reported that a deal was imminent. Reilly replaces the previously departed Michael Wright in the role, while absorbing responsibilities from Steve Koonin’s former post as well.

Reilly, who most recently served as chairman of entertainment for Fox Broadcasting Company, will oversee and lead the aforementioned TNT and TBS networks, including content development; business affairs and production; marketing, brand and creative services; digital platforms; and program scheduling, planning and content-monetization strategies.

Also read: The State of TBS and TNT: What Kevin Reilly Will Have to Tackle

Reilly will be based in Los Angeles, reporting to Turner Broadcasting Systems President David Levy.

“There’s so much theoretical blabber these days about the potential of emergent content and platforms that you can drown in it,” Reilly said. “My six-month journey through the robust but chaotic media marketplace led me to re-confirm a less novel idea: the best place to create, distribute and consume premium television content today is cable TV.”

“Through this process, I connected with kindred spirits in David Levy and the whole Turner organization, who understand both the real value of what we deliver today and how we need to push forward to stay positioned for tomorrow,” Reilly continued. “We are going to use the considerable resources at Turner to entice top talent, create world-class content and meet and engage consumers in a contemporary fashion. I can’t wait.”

Before Fox, Reilly previously led NBC, and was at one time head of FX. Prior to those posts, Reilly was president of television at Brillstein-Grey Entertainment.

A note from David Levy

It is my pleasure to announce that Kevin Reilly is the new president of TBS and TNT and chief creative officer for Turner Entertainment. In this dual role, Kevin will be responsible for overseeing and leading the TNT and TBS networks and brands, including all content development; business affairs and production; marketing, brand and creative services; digital platforms; and program scheduling, planning and content-monetization strategies.

As chief creative officer, Kevin will chair the newly formed Turner Entertainment Programming Council, a coordinated effort engaging the senior programming executives of TNT, TBS, Adult Swim and truTV to explore and develop cross-platform opportunities; expand the division’s pipeline of leading content; and position and advantage Turner as the premier partner for creative providers of every genre. This council will be about influence, creative collaboration, maximizing relationships in the creative community and increasing our strength and leveraging power in the war for content.

Kevin is one of the most respected, innovative and influential executives in the television industry. He most recently served as entertainment chairman for FOX after holding similar positions at NBC and FX. With credits like Glee, 30 Rock and The Shield, it’s obvious that Kevin doesn’t shy away from taking bold programming risks and championing quality television. He was also among the first broadcast network executives to push for meaningful investment in digital and social media. See the attached press release for a more complete look at Kevin’s extraordinary accomplishments.

Kevin joins us at a time when TBS, TNT and Adult Swim are enjoying ratings success, and truTV is in the midst of an extensive brand and programming refresh. But this is also a time when our networks are facing significant challenges, especially in growing our reach among young adults. I’m confident that Kevin has the energy, creativity, personality and leadership style to bring a fresh programming eye to the networks and position them for sustained growth in today’s changing environment.

Kevin is set to join the company this fall. He’ll spend his first few weeks acquainting himself with the network teams and getting up to speed. This fall, we’ll set up a full staff meeting to give all of you the chance to hear directly from Kevin and see for yourself what a great addition he is to our company.