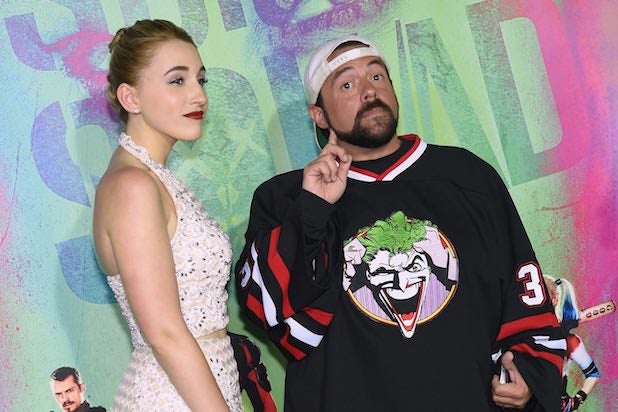 Kevin Smith noticed an Instagram user hurling vicious insults at his 17-year-old daughter, Harley Quinn Smith, and decided to teach the troll a lesson — but not by hurling insults back.

Instead, the writer-director behind films including “Clerks,” “Jay and Silent Bob Strike Back” and “Red State” gave Instagram user kingpsysyphus — and anyone else who enjoys wasting their time tearing down others online — some earnest advice.

“If you hate me (or my kid) this much, the better use of your time is to make YOUR dreams come true, instead of slamming others for doing the same,” the filmmaker wrote on Instagram with a screenshot of the profane comment left on his daughter’s page. “The best revenge is living insanely well – so if you wanna get back at a 17 year old girl for the grievous crime of enjoying her life, the best way to do it is to succeed in your OWN existence.”

“Show the world WHY we should be paying attention to you instead of anyone else,” Smith continued. “Because randomly attacking others merely communicates how creatively and emotionally bankrupt you are. You think you have something to offer the world but others are getting all the attention? Don’t bitch or punish the world: just create. Create something nobody’s ever seen before and there is a good chance the world will notice you.”

Harley is one of the stars of her dad’s latest comedy, “Yoga Hosers,” alongside Johnny Depp‘s daughter Lily-Rose Depp. They play a pair of teenage convenient store clerks who team up with a legendary man-hunter to battle with an army of bratwurst Nazis that are threatening the girls’ party plans.

Like Smith’s previous effort, “Tusk,” it’s not a hit with critics. But kingpsysyphus’ comment goes far beyond any kind of rational criticism any actress should ever have to hear (or read).

“You’re ugly as s—. And that steaming horse s— of a movie, yoga hosers, (sic) should be banned,” the angry comment reads. “F— your talentless c— of a father trying to compare it with the matrix (sic). You’re cancer and I sincerely hope you end up like Lindsay Lohan and dead.”

Smith started his response by giving his followers a glimpse into his teenager daughter’s life.

“What it’s like to be my daughter: 17 year old Harley Quinn Smith received this message simply for the heinous crime of posting a pic of herself on Instagram,” he wrote. “I have zero clue what the reference to #TheMatrix is all about but, wow – way to unload on a teen girl because YOU have nothing to do in life. But even though I should be apoplectic about it, my kid thought it was funny. ‘I’d be mad if I had a tiny d–k and anonymous voice too,’ she said, bemused by the bitterness.”

“You want attention? Don’t make yourself mad, make something original and fun,” Smith advised. “Because if you’re not being useful in this world you’re being useless. Don’t be useless: go make stuff that makes people happy!”

Considering how Kevin’s characters Jay and Silent Bob have dealt with angry online commenters in the past, it seems kingpsysyphus got off easy. But perhaps his fans would have appreciated this approach more:

People hate Third Eye Blind because their first big song had "doo doo doo" in the hook, or because they blame them for songs actually recorded by other artists. But they was doing great things long before they hilariously trolled the Republican National Convention. Here are seven songs that might make you recognize the subversive genius of Third Eye Blind.
View In Gallery