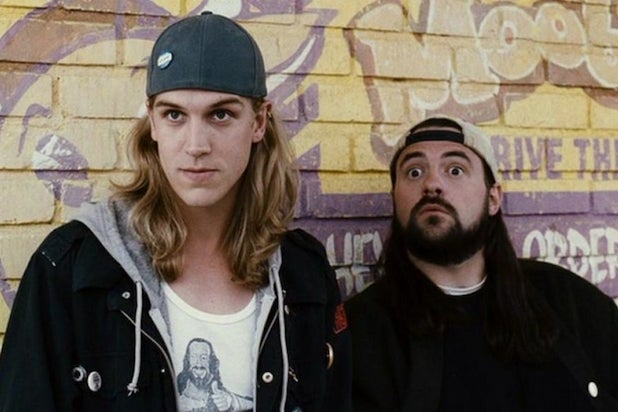 Production is currently underway on the film in which Jason Mewes and Smith are reprising their title roles. Several other actors from the original cast will also return, along with new cameos from across film, TV and music.

Saban Films is planning a “substantial” theatrical release for the sequel. Jordan Monsanto of Smodco is producing alongside Destro Films’ Liz Destro.

Like the original, the new movie will skewer reboots, remakes and sequels, while simultaneously acknowledging that “Jay and Silent Bob Reboot” is all three at the same time. Smith explains in a statement that the new film will tell the story of Jay and Silent Bob attempting to stop a planned Hollywood reboot of the movie that was to be based on them from the first “Jay and Silent Bob” film.

“Last February, I almost died. So on the one year anniversary of my widow maker heart attack, as a celebration of life and a big ol’ F you to Death, my best friend and I will be rolling cameras on a sequel/remake/reboot of a movie we first made nearly twenty years ago,” Smith said in a statement. “In ‘Jay & Silent Bob Strike Back’ our herbal heroes found out Hollywood was making a movie based on them, so they journeyed out to Hollywood to stop it. But I’ve learned so much as a storyteller and have grown immensely as a filmmaker since then, so audiences can expect something completely different: In ‘Jay & Silent Bob Reboot’ our herbal heroes find out Hollywood is making a reboot of the old movie that was based on them, so they journey out to Hollywood to stop it again. I offer my (literal) undying thanks to our amazing partners at Saban and Universal for making this dream come true and backing this cinematic silliness!”

Also Read: Kevin Smith Shows Off 51-Pound Weight Loss: I Hope to 'Get Down to My Birth Weight of 195' (Photo)

“I’m tired of doing Shakespeare all the time so it’ll be nice to get back to playing Jay again,” Mewes said in a statement. “It may be 25 years since I first played the idiot man-child from Jersey but this time’s going to be the best because I’ve really grown into the role of idiot man-child in my old age.”

“Jay and Silent Bob is a global franchise which has a very loyal fan base.  Partnering with Kevin at script stage on the next chapter of these iconic characters is a huge milestone. This is the beginning of a new initiative at Saban Films, to partner on IP with seasoned filmmakers and talent early on in the creative process all the way through distribution,” Bill Bromiley of Saban Films said in a statement.

Bromiley and Jonathan Saba negotiated the deal for Saban Films, with Jackie Eckhouse of Sloss Eckhouse LawCo on behalf of the filmmakers. Universal Pictures Home Entertainment Content Group has picked up all international rights.