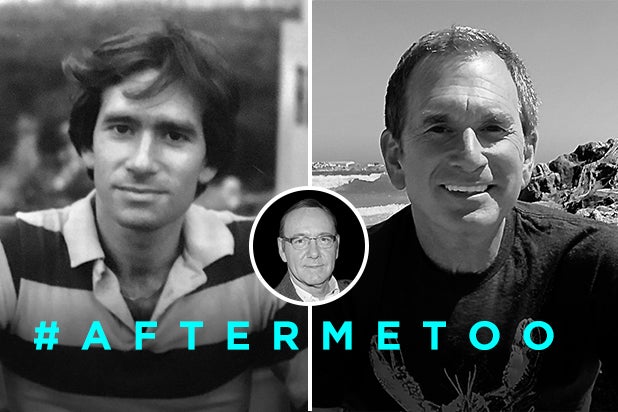 Andy Holtzman says he has no “ill will” toward the man he said sexually assaulted him when he was 27.

Holtzman was a young film program coordinator at the New York Shakespeare Festival’s Public Theater in 1981 when he said that Kevin Spacey, an up-and-coming actor, walked into his office, pinned him to a desk and groped him.

“I want him to get well,” Holtzman, now a 64-year-old event marketer, told TheWrap as part of a report on 12 #MeToo accusers and what has happened to them since they came forward. “He’s not well. Anyone who has been in the closet is not healthy.”

As Holtzman tells it, Spacey came into his office, which had a spare desk and a phone for actors and other theater employees to make a phone call. “I was just getting off the phone myself and before I began to get up, he pushed me down on the desk and he was on top of me,” Holtzman said.

Holtzman, who was openly gay and comfortable with his sexuality at the time, said he wasn’t into Spacey, who at 22 was younger than him. Not to mention, Spacey hadn’t so much as said “hello” before lunging at him.

“I pushed him off and I said, ‘This is my place of work, what are you doing?'” Holtzman recalled telling Spacey. “At this point, he straightened out his shirt, backed off and pulled off of me, very angry, grabbed his bag and stormed out of the office. And I was sitting there, not sure what had just happened.” (Spacey’s lawyer did not respond to Holtzman’s accusations).

“Assault is sudden. Before you know it, the situation has gone from green to red,” he said. “As protection you bury it and put it away… Now I am forced to look at it — the good, the bad and the ugly.”

Also Read: Robin Wright Believes Kevin Spacey Deserves a Second Chance: 'Every Human Being Has the Ability to Reform'

Holtzman said he didn’t report the incident at the time, worried Spacey might retaliate. For years, he wrote it off as just another “good story you tell at dinner.” When a USA Today reporter called in November, he agreed to tell her his Spacey story — which was the earliest known case at the time.

Though he insists he wasn’t traumatized by the incident, he has come to realize the “good story” he had told to a few friends over the years wasn’t all that good after all.

How have you been?
The past nine months have brought this up in surreal details. I’ve dealt with it very superficially over the years. But having the conversations with the USA Today reporter and on Facebook really forces you to face it in a way that you don’t want to do.

What was the reaction to your story?
I was kind of blown away by the outpouring of support. The vast majority were really behind me. It made me feel good. When something like this happens — and I don’t think it matters if you’re a man or a woman, old or young — you blame yourself first.

When it first happened, I asked myself, “What did I do?” And that was the worst part of it. Not what he did, but why he did it, and I immediately blamed myself and it took some work to figure out that I didn’t do a goddamn thing. I was just there. I was just a moment for him.

Why did you decide to come forward with your story?
I came out at the height of the #MeToo movement and I agonized over whether I should tell my story in that kind of public forum. But I decided I should. It was quick, but clearly it was memorable, because for many, many years it was in my head… It must have affected me in some ways I’m not aware of because it didn’t make a lot of sense.

You were one of the few men who came forward during #MeToo. Why do you think that is?
To a degree it’s tough because there’s a vulnerability thing in there that can also be read as weakness, and no one wants to feel too vulnerable… I think I was always needing to get to know someone before I could allow any kind of intimacy…I don’t know if it has anything to do with what happened or not, but for whatever that’s worth, I was not acting like most of my peers who just went for it. I really needed to know the person that I was dealing with after that.

Do you have any regrets?
I did have regrets. They floated in and out. I questioned myself, why did I do this?

When the story came out I felt a bit used. I was told my story was going to be part of a larger story. But the reporter made the piece about me and that was bothersome… I think that got me more attention and it made me look like I was looking for more attention that I was looking for. Some friends said to me, “Was that really necessary to talk about?”

Spacey was criticized for coming out in his initial response to sexual misconduct accusations against him. How did you feel about that?
I would never judge anyone on how they choose to come out. Any gay man and woman knows it’s a difficult thing. But I did feel a great deal of anger that Spacey tried to use coming out as a way to avoid taking responsibility for what he did over the years. I think it was absolutely wrong and a little bit desperate.

How do you feel about him?
I feel no ill will toward the man. I want him to get well. He’s not well. Anyone who has been in the closet is not healthy. A man his age, who has achieved so much, that means there’s a lot there to peel. I don’t want to carry that grudge. I do want him to get to the point where he can speak out and speak to what he did and why he was doing it and try to help others.

His latest movie, “Billionaire Boys Club,” which was shot before the accusations came to light made a paltry $126 on opening day. Was there any schadenfreude?
It was surprising to me that I was heartened by the fact that people do understand that there is a price to pay for what he did… I wouldn’t be human if there wasn’t a touch of that.

It’s all in the context of what is said, how it’s said and how it is done. For me personally, I would take these returns on an individual basis — and look below the surface.