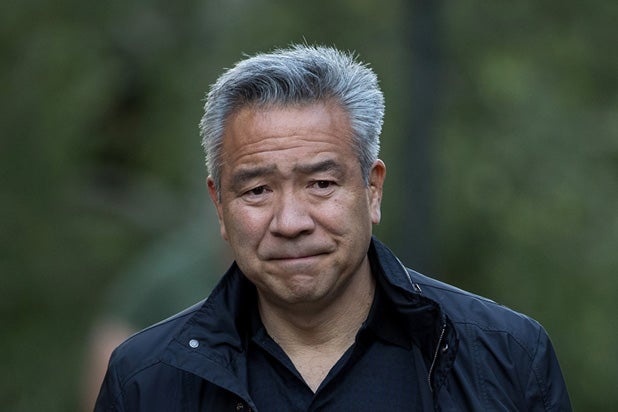 Kevin Tsujihara is stepping down as chairman and CEO of Warner Bros. Entertainment amid an ongoing investigation into Tsujihara’s past relationship with actress Charlotte Kirk, WarnerMedia announced Monday.

Tsujihara and WarnerMedia CEO John Stankey reached a joint decision that his resignation was “in the best interest” of the company, an individual with knowledge of the situation told TheWrap. WarnerMedia has yet to name a successor.

Tsujihara, who has worked for two decades at the studio and served as chairman for the last six years, has denied any wrongdoing connected to his past intimate relationship with Kirk. On March 8, after The Hollywood Reporter published texts between the two that indicated she sought his help in obtaining acting jobs while, he wrote a memo to staff in which he said he deeply regrets mistakes that he’s made in his life.

“It is in the best interest of WarnerMedia, Warner Bros., our employees and our partners for Kevin to step down as Chairman and CEO of Warner Bros.,” Stankey said in a statement. “Kevin has contributed greatly to the studio’s success over the past 25 years and for that we thank him. Kevin acknowledges that his mistakes are inconsistent with the Company’s leadership expectations and could impact the Company’s ability to execute going forward.”

In a memo sent to staff, Stankey wrote: “It was a decision made with the best, long-term interests of the Company, our employees and our partners in mind. Kevin has acknowledged that his mistakes are inconsistent with the Company’s leadership expectations and could impact the Company’s ability to execute going forward.”

Tsujihara also sent a memo to staff, writing: “I love this company and the people that make it so great. I’ve been honored to head this organization and work alongside all of its talented employees over the past 25 years. Together we’ve built this studio into an unequivocal leader in the industry. However, it has become clear that my continued leadership could be a distraction and an obstacle to the company’s continued success. The hard work of everyone within our organization is truly admirable, and I won’t let media attention on my past detract from all the great work the team is doing.”

The resignation comes just weeks after other prominent exits at WarnerMedia, including longtime HBO boss Richard Plepler and Turner head David Levy. They exited in a reorganization that included former NBC entertainment chief Bob Greenblatt taking over leadership of HBO and Turner. All the resignations came after AT&T completed its $85 billion acquisition of Time Warner.

Before his promotion to CEO and chairman in 2013, Tsujihara served as president of Warner Bros. Home Entertainment. He became the first Asian American to run a major Hollywood studio.

He joined Warner Bros. Entertainment in 1994 to manage the company’s interest in the Six Flags theme parks. He then focused on business development and online content before he was named president of Home Entertainment in 2005.

Under Tsujihara’s tenure, Warner Bros. at first struggled to create blockbuster franchises from its DC Comics properties until the success of Patty Jenkins’ 2017 hit “Wonder Woman,” which grossed $821.8 million worldwide. Last year, the studio released “Aquaman.” which has since earned $1.1 billion worldwide.

He also spearheaded the Harry Potter spinoff films, including “Fantastic Beasts and Where to Find Them.” The third film in the franchise is set for 2021. Last year, Warner Bros. had its biggest year ever with $5.5 billion in global box office grosses.