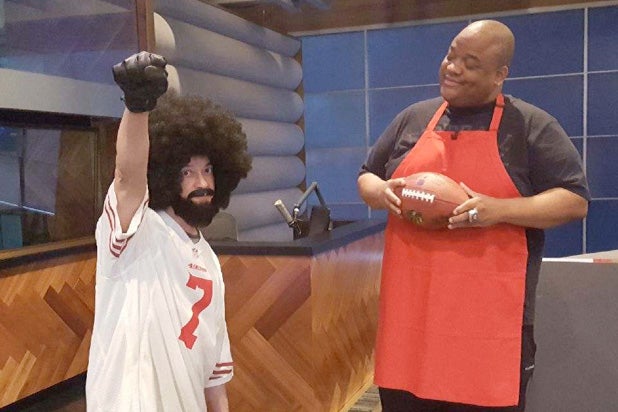 Reid, better known as Kid of “House Party” duo Kid ‘n Play, appeared on air dressed up as the NFL’s most famous free agent. He donned an Afro wig and beard combo, a No. 7 San Francisco 49ers jersey, and wore a black glove on his right hand.

He raised that balled fist for a photo-op, referencing the Black Power salute popularized in American sports culture by Tommie Smith and John Carlos at the 1968 Olympics.

Here’s the moment in question, in case you missed it:

Great to have Kap stop by the studio today. pic.twitter.com/2UPuyCdWdK

“Look, I get it — taking a pic with Jason Whitlock is like taking a pic with Samuel L. Jackson in ‘Django’ — most people might be perplexed by this act and others will get litty on you and call you a ‘coon,’ sellout’ or even worse,” Reid wrote late Thursday. “These are the pitfalls of a public life. I accept them.”

“Let me be clear — the skit and photo were not meant to disrespect Colin’s message or political stance,” he continued. “Rather, we wanted to spoof the media’s treatment of him and the circus that has been created. I understand that Whitlock has been a vocal critic of Colin so the optics of the photo have got me looking crazy. But anyone who knows me knows where I stand on Colin Kaepernick — exactly where he stands.”

In case you’ve avoided all sports, TV and mainstream media over the last year, former San Francisco 49er quarterback Kaepernick made a name for himself off the field — well, just off to the sideline, really — for taking a knee while the “Star-Spangled Banner” was played before his NFL football games. Kaepernick said he was protesting racism in America, particularly the mistreatment of African-American men by police officers. That protest has proven polarizing.

“Moving forward, I recognize the danger of optics without proper explanation-people race to their own conclusions, good and bad,” Reid added in his Thursday social media post. “I also have to accept my part in this controversy-the fact that my rep was taking hits was shocking at first — but I’ve come to a healthy understanding of how some people were dismayed by what went down.”

Here is Reid’s full Facebook explanation for the stunt: