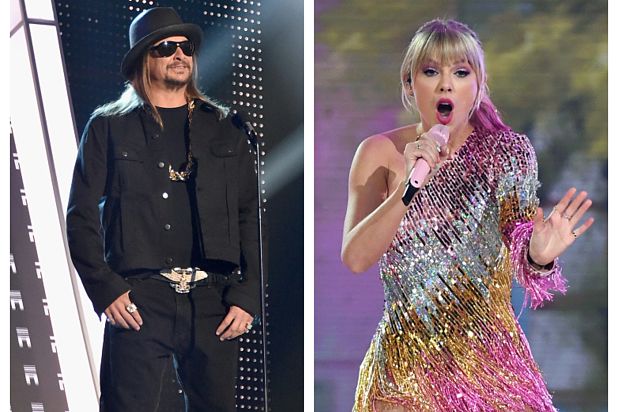 Kid Rock trended on Twitter Friday after sending a crude tweet about Taylor Swift, implying her recent decision to speak out about LGBTQ rights, among other things, is a ploy to be cast in movies.

“Taylor Swift wants to be a democrat because she wants to be in movies….period. And it looks like she will suck the door knob off Hollyweird to get there. Oldest move in the book. Good luck girl,” he tweeted.

Swift, who stars in the upcoming “Cats” movie and was just announced as a performer for this year’s MTV Video Music Awards, covers the September issue of Vogue. Her cover and interview came out Wednesday and featured a discussion of how and why she became politically engaged in recent months, when she was criticized heavily for her silence during the 2016 election.

Swift told Vogue, “Unfortunately in the 2016 election you had a political opponent who was weaponizing the idea of the celebrity endorsement. He was going around saying, I’m a man of the people. I’m for you. I care about you. I just knew I wasn’t going to help. Also, you know, the summer before that election, all people were saying was She’s calculated. She’s manipulative. She’s not what she seems. She’s a snake. She’s a liar. These are the same exact insults people were hurling at Hillary. Would I be an endorsement or would I be a liability? Look, snakes of a feather flock together. Look, the two lying women. The two nasty women. Literally millions of people were telling me to disappear. So I disappeared. In many senses.”

A Fox News host was forced to apologize on-air when Kid Rock, an ally of President Donald Trump, called The View’s Joy Behar a “bitch” during a segment in November of 2018.

Reps for Kid Rock and Taylor Swift did not immediately respond to requests for comment, but Twitter users made quick work of condemning the country rock star and bringing up old instances of what they saw as bad behavior, with the Joy Behar incident being just one.

Hey ⁦@KidRock⁩ know you’re all busy talking shit about ⁦@taylorswift13⁩ so figured I’d send this along in case ya missed it big guy.

Literally any rock is better than Kid Rock. Fraggle Rock, Jailhouse Rock, the Rock, Chris Rock, a small rock that flew up from the road and cracked my windshield.

Reporter and columnist Josh Moon wrote, “Taylor Swift net worth: $400M+/- One of these people definitely doesn’t need to fake a political position to further her career. The other….”

ProPublica’s Jessica Huseman gave some background: “Kid Rock has crafted a careful imagine of himself as trailer park rapper from Detroit turned rich man of the people but his dad was a millionaire and his childhood was spent riding horses and picking apples on his estate.”