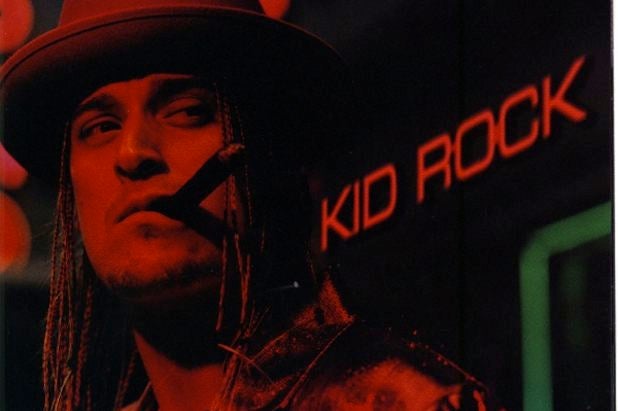 The first leg of Kid Rock‘s career was “pretty gay,” according to the rock star behind late ’90s hits “Cowboy” and “Bawitdaba.”

While he doesn’t quite explain what he means, the 43-year-old musician doesn’t shy away from complete politically incorrect honesty in a new Guardian op-ed, in which he touches on “bullshit” rap-rock, being financially “loaded,” ignoring social media and marrying gay people.

“Rap-rock was what people wanted at the time, and they still love those songs at shows. But it turned into a lot of bullshit and it turned out to be pretty gay,” Rock wrote in the piece promoting his 8th studio album since breaking out with “Devil Without a Cause” in 1998. “If someone says you can’t say ‘gay’ like that you tell them to go fuck themselves. You’re not going to get anything politically correct out of me.”

The “American Badass” is also comfortable clarifying he’s “not just wealthy” — he’s “loaded” from a career spent dabbling in nearly every genre of popular music, including pop, country and blues.

“I can say that because I’m not embarrassed – I’ve made a fuck-ton of money, but I’ve never made a dishonest dollar,” Rock wrote. “I try to do right by the people around me.”

As far as his politics go, the singer said he’s “definitely a Republican,” but leans toward the middle on social issues.

“I am no fan of abortion, but it’s not up to a man to tell a woman what to do,” Rock wrote. “As an ordained minister I don’t look forward to marrying gay people, but I’m not opposed to it.”