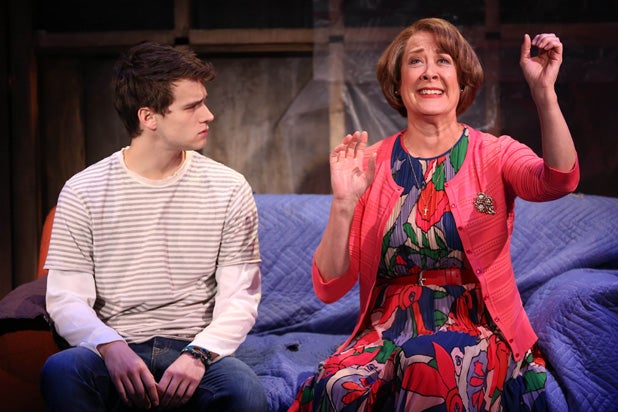 Greg Pierce and the legendary John Kander have written a new musical that makes “Fun Home” look downright sunny. The Tony-winning “Fun Home” begins with the revelation that the young heroine’s father will commit suicide. Pierce and Kander’s “Kid Victory,” which opened Wednesday Off Broadway at the Vineyard Theatre, begins with its young hero in chains, locked in a basement dungeon by his assailant.

From there, “Kid Victory” only becomes darker as it explores the sexual repression of Luke (Brandon Flynn) and his very complicated relationship with Michael (Jeffry Denman), the former high school teacher who has abducted him.

Pierce’s challenging but uneven book, taken from an original story by Kander and Pierce, seamlessly moves back and forth in time, mixing up the events of pre- and post-abduction, with most of the musical devoted to Luke’s traumatic re-entry into the fabric of his family and hometown in Missouri.

Most riveting is that critical pre-abduction moment when Luke and Michael, after months of playing an online computer game, finally reveal their names to each other, and make plans to meet. Kander uses parlando for Michael’s music, while Luke’s lines are entirely spoken. Both actors are outstanding, and Flynn’s naked directness here is especially startling in that his performance heretofore has been a tad overwrought, which is understandable considering the character’s situation. Hopefully, Flynn will dispense with some of the hand-wringing when he relaxes into the character in future performances.

Kander, Pierce, and director Liesl Tommy are superb when they keep things simple. Also memorable are the low-key pleas for understanding “I’d Rather Wait,” sung by Luke’s jilted girlfriend (Laura Darrell), and “Where We Are,” sung by Luke’s understanding father (Daniel Jenkins), who has left too many post-abduction decisions up to Luke’s domineering mother.

Karem Ziemba goes a long way toward making palatable some of the mother’s more insensitive behavior, which includes throwing a big party for Luke’s grand return, over-reacting to his F-bombs, and inviting a church lady into their home for some amateur counseling. That therapy involves a game of marbles that doesn’t go well when the woman and chorus sing the very upbeat “You Are the Marble.”

Kander is famous for giving his musicals a showbiz structure, but the razzle-dazzle here jars. Clearly, he and Pierce mean to lampoon the church lady’s conservative bona fides with “You Are the Marble.” The mistake, however, is repeated not once but multiple times.

Later in the show, Luke’s difficult confrontations with a detective (Joel Blum singing and tapping to “Not Quite True”) and a pick-up (Blake Zolfo singing and tapping with chorus behind him to “What’s the Point?”) are also moments of extreme ridicule.

But to what purpose? The detective is correct in his suspicions about the true nature of the abduction, and the pick-up is simply responding to Luke’s online proposal. It’s as if Kander is relying on old tricks for new material that demands something far less obvious in its effects. Equally unfortunate, when Pierce tries to go big with his lyrics, he ends up with utter nonsense or lines like “People like us/We walk our own streets/While people like them are in slippers/We’re here in our cleats.”

Luke never sings in “Kid Victory.” Are Pierce and Kander saying that his problems are beyond the limits of music? Or are they not up to the task? Less can be more, but with a subject this painfully big, you have to deliver more.