There is subtext etched into every line and crinkle on Annette Bening’s remarkably expressive face.

In “The Kids Are All Right,” the 52-year-old actress, one of the few in Hollywood who clearly has let the years do what they will without a surgeon’s interference, gives a performance that’s as ferocious, funny and just plain knock-your-socks-off moving as any you’re likely to see this year. 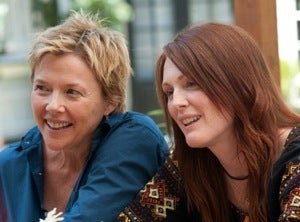 There’s nothing showy or fussy about it; she just nails this character so perfectly — a little fussy, a lot bossy — that you forget she's acting.

“Kids” is about marriage and family. A hit at last January’s Sundance Film Festival, this enormously entertaining comic drama is by co-writer and director Lisa Cholodenko (“High Art” and “Laurel Canyon”).

She puts a lesbian couple (Bening and Julianne Moore) at the center of her story. Their problems and conflicts — over money, sex, drinking, child-raising and housekeeping — are the same as those of any long-term couple, straight or gay.

Watching this film gracefully unfold, with its multi-dimensional characters and very specific sense or habits and place, you realize how far Hollywood has gotten away from dealing with domesticity of late.

Everyone pays lip service to family values, but no one seems to want to see it portrayed on the big screen. Not one of the top five movies (for domestic grosses) in 2009 centered on family life.

Let’s go through the list, in order from numbers 1 to 5: “Avatar” was a sci-fi fantasy pushing an ecological message; “Transformers: Revenge of the Fallen” was about robots and Megan Fox looking hot in short shorts; “Harry Potter and the Half-Blood Prince” concentrated on teenage wizards in peril; “The Twilight Saga: New Moon” was about teenage love and lust, vampires and wolf packs.

And while “Up” came closest to being about family, with its heartrending flashback montage depicting the arc of its widower geezer hero’s long and happy marriage, it was really mostly about his airborne adventures.

Clearly, today’s moviegoers aren’t looking for films grounded in reality. None of these Top Five deal with the humdrum ordinariness of everyday life or the messiness of actual long-term relationships. They’re all about escaping to another world or supernatural fantasy.

When Hollywood does tackle domestic life, it tends to go for the warm and fuzzy, like “Marley and Me,” where it was hard to tell who was blonder and had silkier hair: Owen Wilson, Jennifer Aniston or the titular pooch. Or we get dumb and dopey, like Adam Sandler’s Grown-ups.” Or we get turgid, self-important angst-fests such as 1999’s “The Story of Us."

Mostly, though, marriage is the end point for Hollywood films, not the starting one. Exchanging “I do’s” or the implicit promise of vows to come is the big finish to nearly every rom-com. What comes next is never contemplated.

It’s the long slog that follows, the years and years of paying a mortgage, remaining faithful, raising kids, etc., that’s the real meat and potatoes of a marriage. But who wants to see that?

I do. And especially in “Kids.”

Bening plays Nic, a successful surgeon, and Moore is Jules, who has flitted from career to career and is now contemplating starting a landscape design  business. They’ve been together for two decades and have the kids to prove it: an 18-year old daughter (Mia Wasikowska) and a 15-year old son (Josh Hutcherson).

The offspring secretly track down the anonymous sperm donor who fathered both of them. He’s Paul (Mark Ruffalo), a motorcycle-riding ladies man who owns a funky, organic neighborhood restaurant.

Eventually, everyone meets, and soon Jules is designing Paul’s garden and then the two are getting down and dirty together.

It’s all pretty light-hearted and amusing until it’s not. Once Nic figures out there’s some extra-curricular planting going on, feelings are hurt, badly, and everyone is affected by the emotional fallout.

Each and every character in “Kids” is a fully rounded person. We see both their good and bad sides. We sympathize with each of them, even as we know what they’re doing is wrong, or selfish, or is the wrong thing to say, or won’t get them what they really want.

Bening is the first among equals here, but the other actors are all terrific. It is her character, though, who in the end has the firmest grasp on what family is and why it matters.

Family may not matter to Hollywood, but it should to the rest of us.