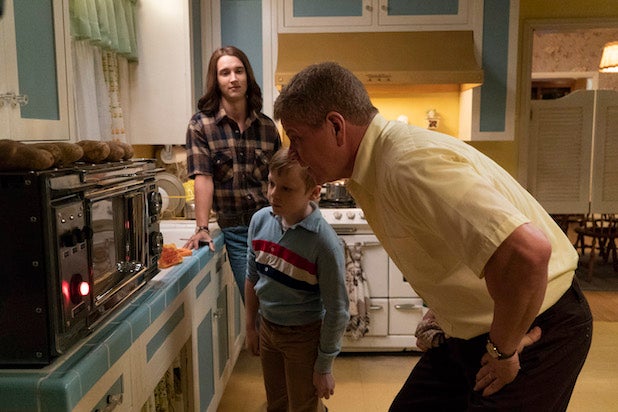 “The Kids Are Alright” is Tim Doyle’s upcoming sitcom about a family that most definitely is not always alright. The Mary McCormack and Michael Cudlitz-led comedy premieres Tuesday night this week on ABC, after the Roseanne Barr-less “The Conners” makes its own series debut. It centers around a family of eight boys in the ’70s. And, yes, it’s based on Doyle’s own life, which means he’s prepared plenty of crazy storylines about his childhood for Season 1.

“We’ve written like seven or eight stories now and I think I’m pretty pleased with all of them,” Doyle told TheWrap. “There are things you know — there’s sort of a family legend about my mother’s hysterectomy that I think is really interesting (laughs). In a comedy, yeah! We’ve, I think very skillfully, found a way to have a lot of fun with that.”

Doyle says they will also cover “a big urban myth” from his childhood that kids today may not remember, but was a defining moment for his age group: a specific Bob Hope special in which Barbara Eden may have had a wardrobe malfunction.

Also Read: 'Kids Are Alright' Creator Really Wants You to Watch 'The Conners' - for Professional and Personal Reasons

“And all of my friends at school seemed to remember having seen something on TV that they didn’t really see, and we’re doing a great story about that,” Doyle says. “There’s an awful lot of fun in the small stuff that kids went through and are going through when they are of that age. And then hopefully that balances with interesting stuff with the parents and with the mom and the dad, in a weird way, growing up in the ’70s as much as their kids did.”

The parents will go through plenty, too. McCormack and Cudlitz play Peggy and Mike Cleary, respectively, the mother and father to the eight boys in this Irish Catholic family.

“We’re developing things for the aerospace industry and one of the things we develop is a microwave oven,” Cudlitz told TheWrap of an upcoming episode in which his character brings work home with him. “And we are basically one of the first families that gets to beta test this thing. And all the amazing, horrible things that happen with everyone’s first microwave. From frozen food to boiling things to things that are too hot, too cold, exploding, what to do with it and what never to do with it (laughs).”

“In the end I think you’ll connect with it because of how you raise your kids or how you were raised,” Cudlitz said.

You can see what Doyle had to say about his lead-in, “The Conners,” here.