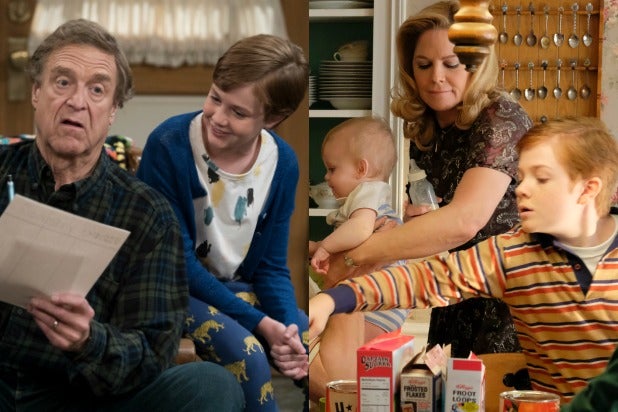 Tonight the eagerly-anticipated “Roseanne” spinoff, “The Conners,” finally premieres on ABC — and so does Tim Doyle’s new ’70s set comedy, “The Kids Are Alright.”

While Doyle — obviously — has a vested interested in you tuning into his show, based on his childhood, he also wants you to check out the Roseanne Barr-less series, both because it’s a lead-in to his program, and because he has some “very good friends” working on the show. See, Doyle was a writer and producer on the original “Roseanne,” and has faith that while “The Conners” is a gamble, his pals can pull it off.

“Everything is a really big risk,” Doyle told TheWrap in an interview last month. “I think ABC did the right thing and reacted appropriately when they fired Roseanne from the show,” he said, noting the decision the broadcaster made to axe Barr and the “Roseanne” revival back in May, before picking up “The Conners.”

“I also believe that, having worked with John Goodman, Laurie Metcalf and some of the rest of those actors, they are insanely talented and could certainly carry a show on their own,” Doyle added. “I know the writers involved and I think they’re talented. So I’m excited and curious to see what they come up with. And I also have a vested interest in the success of the show, because it’s my lead-in. So I want a 100 million people to tune in Oct. 16 at 8 o’clock, so that maybe 30 million of them stick around and sample my product afterwards. So I’m in particular, in this case especially, I’m rooting for it. And you know I wish them all the best of luck.”

Doyle said “The Conners” is going to be a “creative challenge,” but not unprecedented.

“You know, you take ‘Cheers’ and you spinoff ‘Frasier’ from it, and so this minor character on one show suddenly gets a whole world of his own,” Doyle said. “He becomes the centerpiece and the axis around which everything circles. You know, ‘Frasier’ is a different show than ‘Cheers,’ but obviously it ran forever and they built that ensemble and found their voice. These are smart folks and I hope they solve these problems well and come up with a great show.”

But the one thing Doyle doesn’t want “The Conners” to do is reveal how they kill off the titular character right off the bat.

“My only advice to them is don’t give it all away in the first episode,” Doyle said, laughing. “You know, I want people to come back the next Tuesday and the next Tuesday to see my show. My pitch to them is that they have a big tarp with a lump under it in the center of the living room floor that we assume Roseanne is under and they just walk around it for a few weeks and make a few veiled comments about your mom not being around. And then maybe some time around Episode 8 explain what happened to her.”

“But if they walk in the door in funeral clothes in the cold open saying, ‘Ah, it’s a shame your mom stepped in front of that truck,’ well I can hear 25 million people turn the channel,” Doyle said of Tuesday night’s premiere episode. “There is a lot of people who are just going to tune in for that information.”

Speaking of people tuning in, you can read TheWrap’s ratings prediction for “The Conners” here.