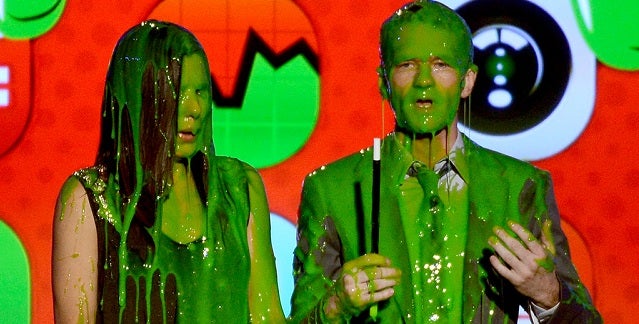 Johnny Depp and Kristen Stewart didn’t get it at the Kids Choice Awards on Saturday. But Josh Duhamel, Neal Patrick Harris, the Lakers’ Dwight Howard, singer Pitbull and Nick Cannon definitely got it.

“It,” of course, was the trademark green slime bath of Nickelodeon’s annual event, held this year at the Galen Center on the USC campus.

"Dude, I was too much of a coward to accept this," said the “Twilight” series star from the podium.

She was spared, as was singer Christina Aguilera, who opened the show in a duet with Pitbull, then dunked her partner and the dancers on stage with the green stuff.

“Transformers” star Duhamel hosted the event and said that a record-breaking 350 million votes had been cast for awards, which honor kids' favorites in film, music, sports and TV.  Then he pulled the switch and green-gooped the Lakers star Howard.

“I guess that’s what we’d call a slime dunk” Duhamel said. Sandra Bullock and Harris got their green on after a messed-up magic trick.