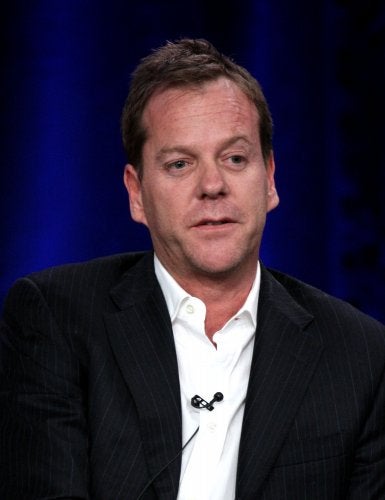 “24” star Kiefer Sutherland may well be asking, “Where’s the beef?” now that a man he gave $869,000 to  buy Mexican steers with was arraigned Tuesday for 12 felonies, including "grand theft with great taking enhancements,"  three counts of forgery, two counts of "obtaining money by false pretenses" and a single count each of embezzlement and "falsifying corporate books."

In addition to the purchase that never was, Michael Wayne Carr is accused by San Joaquin County prosecutors of selling $400,000 worth of cattle entrusted to him by a Colorado man who had purchased the steers for use in rodeo events.

Sutherland reportedly never met Carr, who had never been arrested, but made the investment on the advise of a financial advisor, who told Sutherland that Carr could make a big profit once he sold the cattle in the U.S.

A New Mexico couple are also alleged victims of the scheme, having paid $177,000 to the accused swindler. A third victim is a California man who allegedly loaned Carr 54 steers but never had them returned.

In describing Carr, San Joaquin County Deputy District Attorney Stephen Maier told TheWrap that "in terms of a criminal record, he’s gone from zero to 100. That’s quite an accomplishment and he’ll probably wind up in state prison."

If convicted on all counts, Carr could face a maximum sentence of 18 years, four months.

A look through local court records shows that a civil complaint was filed by Lansburgh against Carr, Catherine Birch and Triple C Livestock on January 14, 2009. A default judgment was awarded to the plaintiff for $2,500,000 although it has been stayed pending a January 28 hearing.

A 2008 complaint leveled against Carr also appears on the consumer Web site Ripoff Report, by a Colorado maker of belt buckles who alleged Carr stiffed the company for $2,000 worth of buckles.