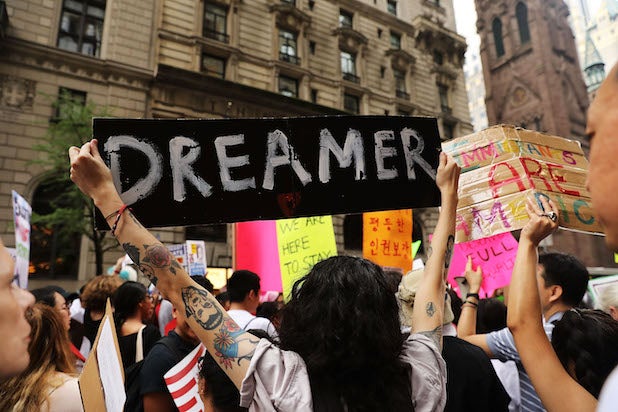 Hollywood is bracing for possible ripple effects from President Trump’s decision Tuesday to end DACA — the program protecting young undocumented immigrants from deportation — warning it’s not just “Dreamers” who should be worried.

“What Trump is doing is not only immoral and cruel, it’s also bad for business,” Santiago Pozo, CEO and Founder of Arenas Entertainment, a media company specializing in marketing to U.S. Latino audiences, told TheWrap. “This is crazy.

DACA, established via executive order by President Obama in 2012, offers two-year work permits and temporary Social Security numbers to so-called “Dreamers,” immigrants under 30 who were brought to the U.S. before their 16th birthday. In order to get the permit, Dreamers are required to finish high school (or still be enrolled) and stay out of legal trouble. Since its inception, DACA has protected nearly 800,000 young undocumented immigrants from deportation.

Pozo, a former undocumented immigrant who has since become a naturalized U.S. citizen, argued that he served as an example of DACA’s positive impact on Hollywood’s economy.

“Arenas has paid millions of dollars in taxes, Social Security, and has made all kinds of contributions to society,” he said. “This company, started by an undocumented immigrant, has given employment to hundreds of people. Hundreds of families make a living through the jobs that I created. This is repugnant and stupid because it’s going to hurt the economic fiber of America.”

Some worry the end of DACA could make it even harder to attract Latino talent, just as the Hispanic community is becoming more visible on TV and film.

“Anything that limits our ability to attract good people who are highly motivated and want to be here hurts us all,” Allen Mayer, head of 42 West’s Strategic Communications Division, told TheWrap.

People like Sandra Perez, a film student at University of California School of Cinematic Arts and DACA recipient from Mexico, are now concerned they may have to give up their Hollywood dreams altogether.

“The plan was to continue writing and look for job in the entertainment industry,” Perez, 28, told TheWrap. “But now I can’t work for anyone.”

Perez, who is graduating this fall, says she’s angry and frustrated by the president’s decision. But mostly she’s scared about what this will mean to her future as a writer and director.

She was hoping to tell immigrant stories after finishing film school. But now she may be forced to go back to a country she hasn’t lived in since she was 13 years-old.

The administration’s decision to end DACA has baffled leaders of the Latino community, who say it muzzles those whose voices need to heard the most.

“We have been encouraging the best and the brightest to get into this field because of how we are perceived,” Alex Nogales, president and CEO of The National Hispanic Media Coalition, told TheWrap. “We need writers, directs actors, producers who can tell our stories.”

Mitú, an online content developer aimed at Latino millennials, also rebuked the president’s announcement, saying the elimination of DACA would cost taxpayers hundreds of millions of dollars. (A recent study by the Center for American Progress estimated the loss of DACA workers would lower the U.S. gross domestic product by $433 billion over the next 10 years).

“This decision is not only immoral but also incredibly destructive to our economy,” Mitú’s president and co-founder, Beatriz Acevedo, told TheWrap. “We are talking about deporting 800,000 mostly employed people from our entire work force. We can imagine that a certain number of those are active creators and artists.”

Acevedo also worries that the exclusion of Dreamers from the Hollywood storytelling pool could result in less authentic storylines in upcoming industry projects.

“Already media has a huge diversity problem when it comes to connecting with the next generation of storytellers,” she said. “Dreamers at risk might never be able to have a chance to tell their story and that is a big loss not only for the creative community but for our country as well.”

“The Dreamers impacted by this cruel and misguided decision make significant contributions to our economy and our country,” said the top Disney executive in a statement.

In a statement, the WGA East and WGA West echoed those concerns.

“As we said in January, when Donald Trump first attempted to impose a ban on Muslim immigration, “From its early days, the entertainment industry has been built by the imagination of immigrants,” the guilds said. “Our guilds are unions of storytellers who have always welcomed those from other nations, and of varying beliefs, who wish to share their creativity with America.”

And Cher announced she would house Dreamers in need, urging other members of Hollywood to help protect Dreamers.

“Those Who Can Must Take a DREAMER in2 Their Home & Protect Them !! I’m Ready 2 Do This & [prayer emoji] Others in MY BUSINESS WILL DO THE SAME !! SANCTUARY,” Cher tweeted.

TheWrap reached out to all six major studios to see if they had a comment on the DACA decision or any information about the number of employees potentially affected. Representatives from Warner Bros. and Universal declined to comment, while Sony, Fox and Paramount did not respond to requests for comment.

The Justice Department said it will give Congress a six-month window to possibly save the policy. The Trump administration will stop considering new applications for legal status dated after Tuesday.