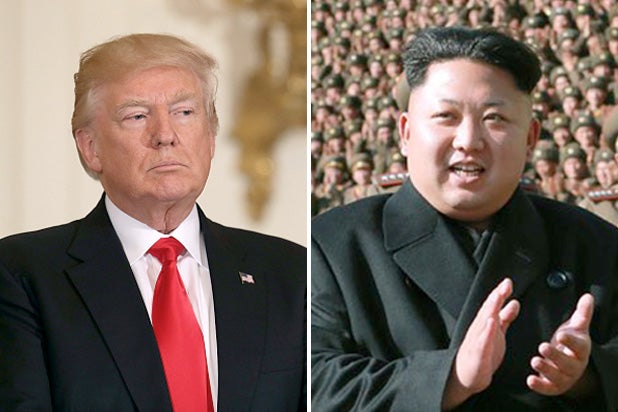 It’s “Rocket Man” v. “Dotard” in what might be the only petty insult contest backed by nuclear missiles.

Days after Donald Trump gave a speech to the United Nations in which he deployed a new nickname for its dictator Kim Jong-un, the “Rocket Man” himself has replied with some choice disses of his own. In an official statement — no really — Kim calls Trump a “mentally deranged” “dotard” who will “pay dearly.”

A dotard, by the way, is “a person, especially an old person, exhibiting a decline in mental faculties” according to the Oxford English Dictionary.

Trump’s speech Monday at the U.N. focused on North Korea and called out the country’s recent provocative missile tests launched over Japan. If, Trump said, the U.S. is “forced to defend itself and its allies, we will have no choice but to totally destroy North Korea.” Trump added that “Rocket Man is on a suicide mission for himself and for his regime.”

“A frightened dog barks louder,” said the statement released Thursday by North Korea and attributed to Kim Jong-un. “I will make the man holding the prerogative of the supreme command in the U.S. pay dearly for his speech calling for totally destroying the DPRK.”

“I will surely and definitely tame the mentally deranged U.S. dotard with fire,” the statement concluded.

Terrifying geopolitical implications aside, it seemed that the North Korean dictator appears to have introduced a wide cross-section of the internet to a savage new word.

I had to look up #dotard in the dictionary

OK. I admit it. I had to Google the word "dotard." ???? #dotard pic.twitter.com/6qQzVIuBYv

Had to look up the definition of #Dotard. It means an old person, especially one who has become weak or senile. Yikes. https://t.co/Rb4bjR1Z5E

Unfortunately for Trump, while almost no one thinks Kim Jong-un isn’t absolutely terrible, the consensus that quickly emerged is that, judged solely by vocabulary alone, North Korea might have won this round.

Whoa. It takes a strange kind of genius to pick a word that makes everybody find a dictionary and go "Holy cow, he IS a #dotard."

While I'm certain no one wins in a nuclear war, I might put my money on Kim Jong Un in a game of Scrabble vs Donald Trump. #dotard

It's perfect.
Why has no one ever called Trump this before? https://t.co/VhcsSp8zLX

“I want to avoid a rap battle, but if provoked, I will release our full arsenal of Kanye on the Rocket Man…”

No nuclear war. I want Donald Trump and Kim Jong Un to settle this with a rap battle. https://t.co/cLmjaMBqWv

But just in case we forget the stakes:

me laughing along with #dotard tweets but also watching for nuclear missiles to fall from the sky pic.twitter.com/pzMgf8Xi6W