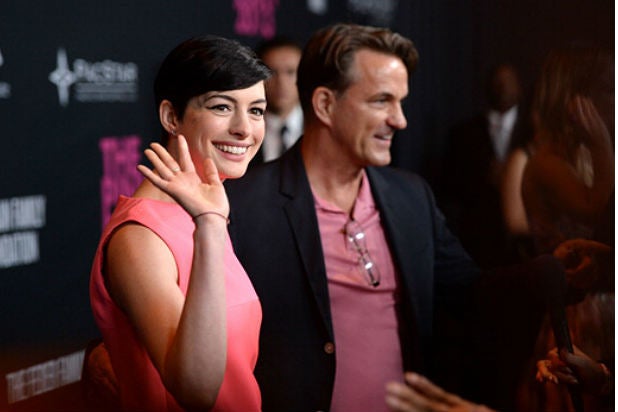 It Is Brain Surgery

Randy Newman missed a golden (and blue) opportunity when he took the stage at UCLA Neurosurgery’s Visionary Ball at the Beverly Wilshire on Thursday night.

He sang the classic version of his Laker-and-Dodger victory anthem “I Love LA” — missing a key opportunity for a lyrical tweak: “I Love UC-LA.  Perhaps he felt others had already sang the praises of the brain surgeons’ medical heroics.

Before producer/New York Giants chairman Steve Tisch, Chuck Lorre, and director William Friedkin took the stage for awards, survivor after survivor took the microphone to tell the medical team: “I owe you my life.” As far as Beverly Hills charity dinners go, this one didn’t sugar coat it.

Two-time Oscar winner Friedkin painted a picture of his seven hour observation of a dual-brain surgery in a graphic vocal storyboard that only one who directed “The  Exorcist” could deliver.

Other survivors sharing their stories included a Mumford-type singer-songwriter who just had brain surgery five weeks ago, and a woman who woke up at UCLA after a month in a coma.

Thankfully, Jim Burrows (above right, with Lorre) lightened the mood: “What do you do when your rabbi pops up on your caller ID?” Burrows said while presenting an award. “You run through your sins, transgressions, and your donations.”

Friends, colleagues, and clients of PR it-guy Chet Mehta flooded the roof of the Thompson Hotel in Beverly Hills to help him celebrate his company PR Dept.’s one-year anniversary on Tuesday night.

With five other events going on that night, the draw of those who are usually working, or went to work afterwards, was impressive.

Here’s the top five invites that Hollywood is hoping to see in their inboxes:

Unicef Masquerade Ball, Wednesday, October 30 @ Hollywood Forever Cemetary
Masks will cover up Brooklyn Decker and I’m hearing lots more young Hollywood are coming onboard this costume party that touches down in LA for the first time after years in New York.

Soho House Halloween, Thursday, October 31 @ Soho House
A standby, but this year it’s ticketed and members’ guest counts have been cut back.

Treats Magazine “Trick or Treats” Party, Thursday, October 31 @ No Vacancy
By the time he gets to this, Aaron Paul will be glad it’s the last time he’ll have to pose with all the “Breaking Bad” meth suit costumes. A soviet door policy and guest list, DJ/Producer Zen Freeman’s exponential career-year continues with pals Emile Hirsch, Gerard Butler, and Rosie Huntington-Whiteley expected.

Vogue Italia editor-in-chief Franca Sozzani shows off the 15 carat bling at Spago Thursday night. Check out Kanye as the background music: He’s  docile and smiling at this public spectacle.

Despite the names in the room – Ben Silverman, Babyface, Maria Sharapova, Ali Larter, Devon Aoki, and the Q (Quincy Jones), it was not an engagement party. Gelila and Wolfgang Puck opened their doors for a benefit aimed at creating a middle class in Africa – the Dream For Future Africa Foundation. Gelila founded the group.

Before a personal appearance at TAO in Vegas on Friday night to “celebrate her 33rd birthday”, it’s good to see America’s new 1st family choosing an unpaid charity for their first appearance.

The “Who What Wear” women Katherine Power (left) and Hillary Kerr (right) should be smiling more.

In addition to host Nicole Richie (center), Jessica Alba, Ahna O’Reilly, Leven Rambin a chunk of the stylist community, and blue chip brand Cadillac all came aboard to ride  elevators to the top of the London for their party honoring “50 Style Stars” on Thursday night.  (Photo by John Shearer)

The media-shy Andy and Lana Wachowski showing face at the Australians in Film Gala at the Intercontinental, also on Thursday night.
Black Flag, Black Sabbath

Elijah Wood (above left with Obsourne) hosted, but Sparks told me he came for the same reason the fans lined up on La Cienega did — he’s a dedicated gamer. Sparks then schooled me on the US-centric revenue model of gaming franchises.

The only rock n’ roll behavior here came from former Ms. Golden Globe Francesca Eastwood and her male companion. As people were still filing in, security threw them out. The guy was yelling “you’re a bitch” at his involuntary security escort, clearly not waving the white flag.

Following up on a People Magazine cover sit-down, Mischa Barton continued her comeback campaign with a stop in at a launch party for online “fashion community” Dahlia Wolf, on La Brea on Tuesday.

The Santa Monica Museum of Art got spooky for a “dining exhibit” – including venison with pine glee and cocoa coffee soil – steered by Geoffrey Arend and Christina Hendricks. The group of 25 gathered to get an preview taste of new  Johnnie Walker Platinum Label.

Not to be outdone by a whisky-enthused actress, One Management chief, man-about-town photographer, and Courtney Love’s touring drummer Scott Lipps hosted a dinner at the Grey Goose Boulangerie pop-up.

Rainn Wilson, BJ Novak, Pardis Parker and Aaron Lee all took the stage at the Laugh Factory for the 10th Annual Comedy For A Cause, sending $75,000 over to the Hollywood Wilshire YMCA for children’s programs.

Pink October is Not Over Yet