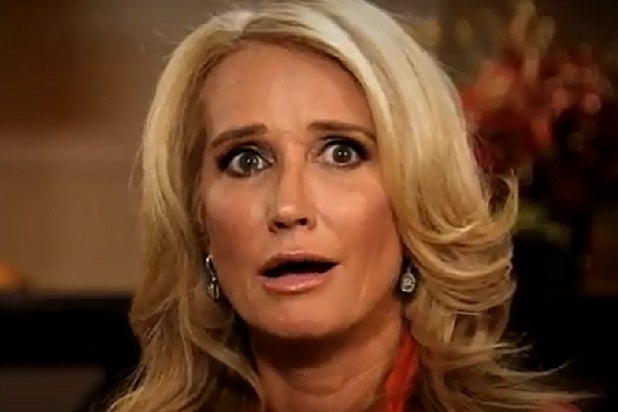 The “Real Housewives of Beverly Hills” star, who was arrested last week on charges of public intoxication, trespassing, resisting an officer and battery on an officer stemming from an alleged drunken meltdown at the Beverly Hills Hotel, bolted from an interview with Dr. Phil McGraw, according to a promotional clip for an upcoming episode of “Dr. Phil” in which she discusses the incident.

In the clip, an emotionally agitated Richards declares, “I’m beating myself up over this.”

See video: 'Real Housewives' Kim Richards Opens Up to Dr. Phil on Her Arrest: 'The Whole Night Was All My Fault'

“Are you living a lie telling everyone you’ve been sober for three years?” McGraw asks her.

Things hit a boiling point when McGraw tells the mother of four: “You are drunk in a bar fighting with a cop. That is not good mothering.”

“Is this an intervention?” Richards asks before abruptly standing up and leaving the room.

Police said that Richards, who was “displaying symptoms of alcoholic intoxication,” cursed at the police when they arrived and “passively resisted arrest,” then kicked one of the police in the leg after being transported for booking.